Where Senses Fail?: Lewis’ “On Being Human”

Back when I was in college, a romantic film was released in theaters which chronicled an angel’s quest to become human. Angel Seth falls figuratively (and later literally) for a human physician named Maggie Rice.  Seth is jealous of Maggie’s ability to taste the rich juices of an apple, to inhale the fragrance of the autumn leaves, to enjoy all of the ecstacies of being human.  Seth eventually falls from a building to gain humanity.  He spends one glorious night with her.  The next morning, as Seth feels the first sensations of a hot shower raining down on his newly acquired skin, Maggie cycles on a mountain road, her hands outstretched as if she is trying to embrace the wind.  The breeze caresses her face, but distracts her from a truck pulling into her path.  Her last sensation is pain.  Seth, now fully christened to his physical body, must also endure another human experience – grief.  As the film ends, Seth adjusts to his new life with a physical presence, but without Maggie.  Consequently, Seth paid a high price to become human.

Hmmmm.  What a concept.  Angels jealous of humans?

I Peter 1:10-12 states this: Concerning this salvation, the prophets, who spoke of the grace that was to come to you, searched intently and with the greatest care, 11 trying to find out the time and circumstances to which the Spirit of Christ in them was pointing when he predicted the sufferings of the Messiah and the glories that would follow. 12 It was revealed to them that they were not serving themselves but you, when they spoke of the things that have now been told you by those who have preached the gospel to you by the Holy Spirit sent from heaven. Even angels long to look into these things.

Angels long to possess humanity?  What on earth (or in Heaven) would attract a servant of God to desire our station?  With our myriad of faults, humanity can be barely tolerable at times. But perhaps City of Angels is on to something.  Are there experiences inherent to the human condition which inspire celestial beings to wish for the opportunity to be human?  Angels have access to the very essence of Heaven.  It is a grand mystery why they would, for one brief moment, exchange all of Heaven for the use of the senses, for the chance to feel.  To feel can be both a blessing and a curse; it introduces us to intensity on both ends of a spectrum.

Behold the Forms of nature. They discern

Unerringly the Archtypes, all the verities

Which mortals lack or indirectly learn.

The Tree-ness of the tree they know – the meaning of

The solar beam uplifts it, all the holiness

But never an angel knows the knife-edged severance

Of sun from shadow where the trees begin,

The blessed cool at every pore caressing us

-An angel has no skin.

They see the Form of Air; but morals breathing it

Drink the whole summer down into the breast.

The lavish pinks, the field new-mown, the ravishing

The tremor on the rippled pool of memory

That from each smell in widening circles goes,

The pleasure and the pang – can angels measure it?

An angel has no nose.

The nourishing of life, and how it flourishes

On death, and why, they utterly know; but not

The ripe peach from the southern wall still hot,

Nor porridge, nor the tingling taste of oranges –

An angel has no nerves.

Far richer they! I know the senses’ witchery

Guards us, like air, from heavens too big to see;

And dazzling edge of beauty unsheathed would be.

Yet here, within this tiny, charm’d interior,

This parlour of the brain, their Maker shares

Forever ours, not theirs.

Lewis reveals that angels know how things are formed and made, understand the physics of the world and yet, have never experienced it.  They are the engineers who know the automobile, are acquainted with the precise dimensions of the engine and the contours of its design, yet never know how it feels to drive it.  We, on the other hand, cannot comprehend the enigmas of faith, yet feel the connection with our Savior, a feeling that surpasses all other emotions.  Feeling is quite a luxury.

As humans, we have a knack for taking things for granted.  What delight there is, we often forget, when we bite a Reece Cup, the tastes of chocolate and peanut butter mingling on our tongues.  We rush along, failing to acknowledge the aroma of summer rain in the air, damp blossoms and the “smell of green”.  We fail to recognize the intense pleasure of running a hand down the lush coat of our favorite pet (if it has fur…) or the womb-like fuzzy blanket that wraps around us as we slip under it on winter evenings.

And angels can’t experience these things.

Have you ever sat around a fire with friends and when you briefly turn aside, still feel the heat radiating from your cheek?  Have you really listened to the tune of birds when you wake up in the morning?  Being human can be problematic, but also has many advantages.  God has made us in His image; we are His sons and daughters.  He loved us so much, He willingly gave his Son to carry our burdens and sins. Of course angels are jealous.  We are heirs to a beautiful kingdom and glory far beyond our comprehension.  They have seen the kingdom already, but we will experience it infinitely.

Our senses introduce us to a world of experiences, ones we often neglect.  Earlier today, I complained to my husband that we were running low on bread, but have I ever enjoyed the “new loaf’s billowy curves”?  I don’t think I have, but I should. Our senses may be “witchery” which may guard us against the “heavens too big to see” but they grant us a full encounter with God – an encounter brimming with possibilities to interact supernaturally to depths that cannot be equalled by angels.

Resolve today to utilize your senses to their height.  Appreciate the experience of “being human” and make angels envious. 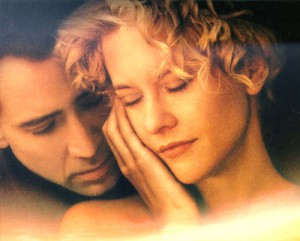