If you search the term “C.S. Lewis” in Amazon, you will yield 32,557 results.  This includes Lewis’s long list of literary works (academic, apologetic, and fictional works) as well as scholarship written about Lewis and his writings.

So the question is:  why do we need another biography on Lewis, when the field is already saturated??

Alister McGrath confidently addresses this question in the introduction to his book C.S.Lewis – A Life.  McGrath grew up in Belfast, Northern Ireland, just as Lewis did. He is also a trained theologian, who currently serves as chair of theology, ministry, and education at the University of London. Who better to launch a holistic exploration of Lewis than someone who hails from his native Ireland and possesses a comprehensive knowledge of theology?  McGrath’s extensive bibliography includes works such as Mere Apologetics, Theology: The Basics, Christian Theology: An Introduction (which I own), “I Believe”: Exploring the Apostles’ Creed, Christianity’s Dangerous Idea: The Protestant Revolution, “The Dawkins Delusion?: Atheist Fundamentalism and the Denial of the Divine, and Why God Won’t Go Away: Is the New Atheism Running on Empty? Perhaps there are many Lewis biographies out there, but McGrath’s voice shares a fresh perspective on Lewis.

For one, the exploration of 1890s Ireland is an important and necessary aspect in understanding the political and social turmoil which dominated Northern Ireland during Lewis’s development. McGrath devotes his first chapter to explaining this climate in great detail.  McGrath explains how Charles Stewart Parnell led a movement to restore “Home Rule” – a sweeping revolution which aimed to eliminate any trace of English influence (and Protestantism) and return to Irish nationalism, including a restoration of the Catholic faith.  Furthermore, McGrath illustrates how the rift between Catholics and Protestants left deep scars on citizens of Belfast, including the Lewis family.  This is especially true as Lewis’s maternal grandfather was an Anglican minister.  Lewis’s father Albert was a court solicitor in Belfast, giving both Lewis sons an intimate knowledge of Irish politics (Albert insisted that his sons endure these conversations so they could be well-educated; unfortunately for him, his sons absolutely detested political discussion).  Anyone who has read Boxen, Lewis’s youthful writings from his childhood about an imaginary Animal-Land, can detect the residue of these arguments. Lewis would later weave these political reflections into some of his writings – read “Meditations on the Third Commandment”, “Willing Slaves of the Welfare State”, and That Hideous Strength among others.  This section provides the reader with great context for Lewis and gains greater validity, in my mind, because it is written by an author who, like Lewis, came of age in the same country (and to an extent, the same turmoil) as he.

Another aspect of the biography that I enjoyed is McGrath’s refusal to create hagiography.  Lewis was the first to admit his own shortcomings, and McGrath also illuminates these issues without “bashing” Lewis. As Lewis scholar Bruce Edwards points out in his four-volume collection C.S. Lewis: Life, Works, and Legacy, there is often a tendency to elevate Lewis to a saint who sipped lemonade or to foolishly cast him down as an amateur theologian who tricked the world with his brand of lukewarm doctrine titled Mere Christianity.  McGrath’s biography lands somewhere comfortably in the middle.  He maintains a cautious objectivity throughout the work.  As an admirer of Lewis (and someone who has thoroughly read his works, not just the popular ones), I appreciate this objectivity.  He mentions Lewis’s longstanding friendship and correspondence with admitted homosexual Arthur Greeves.  He admits that Lewis desired a strong “drink” after his wife died.  C.S. Lewis was a human, fraught with spiritual complexity as we all are.  McGrath presents him as such, much to my relief.

The final aspect I enjoyed was McGrath’s shrewd examination of Lewis’s relationship with women.  As a female Lewis scholar, I have endured much grief from others over the fact that Lewis supported the “men’s club” of the Inklings and prevented Susan from passing out of the Shadowlands in Narnia. After reading this biography, I have taken a greater interest in Lewis’s involvement with women.  I will be addressing this topic specifically in an upcoming blog series later this year on Crystalhurd.com.  For now, I want to focus my critique on three areas that McGrath addresses:

**McGrath discusses, at great length, the relationship between a young Lewis and Mrs. Moore.  McGrath argues that Lewis obviously admired Mrs. Moore enough to choose spending his WWI furlough with her instead of his father.  Although Lewis had a fractured relationship with his father, McGrath argues that Lewis’s attraction to Mrs. Moore was stronger. He even pulls “hints” out of various letters which reference a visitor, which he implies was Mrs. Moore. Nonetheless, Lewis took on the chore of supporting the Moores after his return from the war (or more precisely, Albert mainly supported the Moores, although he was unaware of the relationship for some time).  I find it difficult to believe that a 20-year-old would take on the burden of a family simply because he made a verbal contract with a friend.  Although Lewis possessed a strong sense of duty, I entertain the notion that he perhaps had an attraction to Mrs. Moore.  Note that I am not asserting that he carried on a relationship (sexual or otherwise) with her, but rather that he was drawn to her in some fashion.  Did he view her as a “surrogate mother”?  Perhaps (but not in some strange Oedipal way).  Lewis never addressed her as Mrs. Moore, but as “Minto”.  However, in letters written shortly before her death, Lewis refers to her as his “mother”.  Nonetheless, she plays in integral part in Lewis’s story, and McGrath gives her due attention. Some biographies dismiss this association almost completely, while others assume there was a passionate love affair between them. While we may never know for sure, it is dangerous to speculate without evidence.  McGrath, however, constructs a careful argument using Lewis’s letters and diary. He does not demand the reader accept one side of the argument, but scrupulously presents the evidence for our consideration.

**McGrath also discusses the role of talented philosopher Elizabeth Anscombe in shaping Lewis’s later literature. Anscombe was present at the Oxford Socratic Club and argued with Lewis about the philosophical aspects of Lewis’s book Miracles, specifically the claim that naturalism is self-refuting.  Many writers claim that Lewis “lost” this argument and that Lewis was so humiliated that he abandoned his theological writings for children’s literature. This notion is completely absurd. It is apparent that Lewis was not threatened by intellectual women.  In fact, he kept a healthy correspondence with many women over the decades. McGrath highlights the fact that Anscombe’s words assisted Lewis in improving his perspective.  Therefore, her input helped him clarify his argument.  This is no philosophical wrestling match; it is more an instance of “iron sharpening iron”. Lewis deeply appreciated Anscombe’s comments.  After this, Lewis revised chapter 3 of Miracles.   Some scholars wish to paint Lewis as resentful of a “smart woman”, but McGrath’s close examination reveals that Lewis found Anscombe a worthy and respected intellectual.

**A final relationship which McGrath explores is Lewis’s marriage to Joy Davidman.  McGrath discusses the assertion made by Douglas Gresham that his mother “seduced” Lewis. Recent findings at the Wade Center, which McGrath alludes to in his work, support this statement.  McGrath writes,

These newly acquired papers include forty-five sonnets, written by Davidman for Lewis over the period 1951-1954.  As Don King has noted, these sonnets deal with Davidman’s intentions of returning to England after her initial meeting with Lewis and forging a closer relationship with him.  Twenty-eight of these sonnets set out in great detail how Davidman attempted to forge that relationship.  Lewis is represented as a glacial figure, an iceberg that Davidman intends to melt through a heady mixture of intellectual sophistication and physical allure.

McGrath makes a point that Joy was rather pushy about some issues, including her insistence that she (as his wife after a civil ceremony) and her boys occupy the Kilns.  In fact, McGrath highlights an “unpleasant” confrontation between Maureen Moore Blake and Joy, during which the latter claimed that her boys should inherit the property, while Maureen rightly stated that the home would pass to her.  Joy certainly admired Lewis for his integration of mind and faith, and as we all know, Lewis would eventually develop mutual feelings for her.   If he felt “coerced” to marry her initially, he was certainly more than willing to marry her in a religious ceremony at her hospital bedside on March 21st, 1957.  Call it “seduction”, but their relationship produced real, abiding love.  Reading A Grief Observed shows the depths of Lewis’s devotion to Joy.

Overall, I found McGrath’s biography enjoyable.  He strives to remain objective, while painting a comprehensive portrait of a complex man.  I urge you to read this biography to broaden your understanding and appreciation of Lewis. 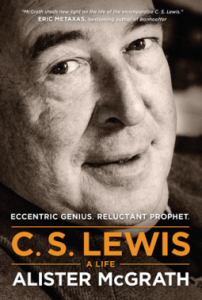