The Sinking of Atlantis: Flora Lewis

Week One of the C.S. Lewis and Women Series

Please note: In the following post, I will refer to C.S. Lewis as “Jack” to simply distinguish him from other members of his family.   I typically refer to him as “Lewis”, but to avoid confusion for this installment of the series, I will use “Jack” (since he detested the name “Clive”).

The Sinking of Atlantis: Flora Lewis

“With my mother’s death all settled happiness, all that was tranquil and reliable, disappeared from my life.  There was to be much fun, many pleasures, many stabs of Joy; but no more of the old security.  It was sea and islands now; the great continent had sunk like Atlantis”

February 15, 1908 – Three doctors walked through the stately iron gate surrounding a modest home on the outskirts of Belfast, Northern Ireland.  The medical team (assisted by two nurses who had arrived the night before) came equipped with various instruments used to perform surgery which would hopefully prolong the life of a woman plagued with abdominal cancer.  Their patient was a 45-year-old mother of two and wife of a court solictor, Flora Lewis.  In the past, Flora wrestled with headaches, fatigue, and a loss of appetite.  Once the diagnosis was made, doctors and nurses worked exhaustively to restore her health.  As was the custom,  her surgery was performed in the home, on a table on the first floor. 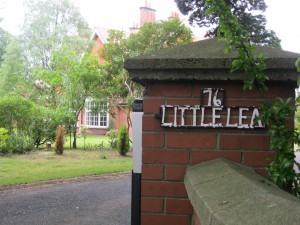 Little Lea, taken by Crystal Hurd in May 2011

It is difficult to comprehend such an ominous sight.  Her youngest son, Clive Staples or “Jack”, must have endured unimaginable apprehension.  According to his correspondence with Nurse Davison (the “senior nurse” over Flora’s care), the young Lewis seemed determined to bear his mother’s illness with feigned fortitude, an armor of apathy that would surely tarnish as the years passed:

After his older brother Warren was sent to an English preparatory school, Jack had grown close to his mother.  Although the Lewis boys had a nurse who read to them and taught them nursery rhymes (Lizzy Endicott) and a governess (Miss Harper), Flora attempted to educate her sons when she could.  Despite her nagging headaches and frequent episodes of bedrest, she instructed her youngest son in Latin, French, and math (which as many know, was a weak subject for Jack).  She was a woman of substantial intellect, earning a degree in math from Queen’s College in an age where most women settled into the conventional expectation as homemaker. This caused her to be teased a great deal. Her father, Thomas Hamilton, was vicar at Saint Mark’s Dundela.  She was descended from a long line of “clergyman, lawyers, sailors, and the like” (Sayer 4). 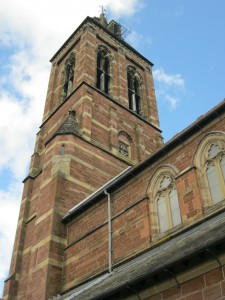 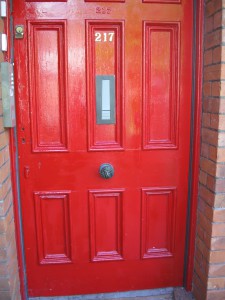 Photos of St. Mark’s, the vicarage, and the famous “Lion Head” doorknob

Photos taken by Crystal Hurd in May 2011

Flora met her future husband at her father’s church.  George Sayer writes that Flora first courted Albert’s brother William.  After deciding that she simply “could never love [William]”, she swapped him for his younger brother.  Albert was a eloquent speaker, which, as Jack claims in Surprised by Joy, illustrated his great promise as a politician.  The Lewis boys experienced a bit of ying and yang in their parents, with a passionate, argumentative father and a cool, tranquil mother: “My father’s people were true Welshmen, sentimental, passionate, and rhetorical, easily moved both to anger and to tenderness; men who laughed and cried a great deal and who had not much of the talent for happiness” (3).  This was in great contrast to his mother, whose family was a “cooler race” in which their “minds were critical and ironic and they had the talent for happiness in a high degree – went straight for it as experienced travelers go for the best seat in a train” (3).  Sayer disagrees with this statement, as he remarks that Thomas Hamilton often  railed against Roman Catholicism in the pulpit while her mother incessantly argued politics, namely the restoration of Irish nationalism and Home Rule.

Nonetheless, the marriage endured.  Albert worked tirelessly, leaving his children with his wife and the house staff.  Flora wrote short stories and articles that her husband critiqued but which, unfortunately, were never published.  In her better days, she travelled often with her sons while her husband was preoccupied with work.  Jack remembered these holidays with much fondness.

After that fateful February morning, Flora experienced a brief period of convalescence.  In May, Flora felt well enough to take her two sons to a house in Castlerock, located in County Derry.  Due to the damp Irish climate and the consistent fear that Jack suffered from a “weak chest”, Flora often took her sons to this northern resort for warmer temperatures and relaxation. 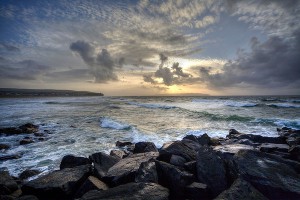 But the season of hope and healing would not last.  In June, Flora was ordered to remain on bedrest. Her symptons continued to worsen and on the morning of August 23 (Albert’s birthday), Flora passed away.  The night before, Albert spoke to her about the goodness of God, to which she poignantly inquired, “What have we done for Him?”  Albert later reflected in his notebook that Flora was, “As good a woman, wife and mother as God has ever given a man”.

A stiff, uncomfortable nine-year-old Jack was brought in to view the body of his recently deceased mother.  He recounts this episode with great horror in Surprised by Joy:

“Grief in childhood is complicated with many other mysteries. I was taken into the bedroom where my mother lay dead; as they said, ‘to see her,’ in reality, as I at once knew, ‘to see it.’ There was nothing that a grown-up would call disfigurement – except for that total disfigurement which is death itself.  Grief was overwhelmed in terror.  To this day I do not know what they mean when they call dead bodies beautiful. The ugliest man alive is an angel compared with the loveliest of the dead. Against all the subsequent paraphernalia of coffin, flowers, hearse, and funeral I reacted with horror…To my hatred for what I already felt to be all the fuss and flummery of the funeral I may perhaps trace something in me which I now recognize as a defect but which I have never fully overcome – a distaste for all that is public, all that belongs to the collective; a boorish inaptitude for formality.”  (19-20)

Jack would come to face a stark truth – it would take years, perhaps the rest of his life, to recover from Flora’s death.  In fact, the feeling would revisit him many years later, as his wife Joy was dying of cancer. Surely Jack felt empathy for her sons David and Douglas.  There is a remnant of this sensation found in The Magician’s Nephew when Digory Kirke asks Aslan for a Narnian apple to restore his mother’s health.  In his fictional tale, Jack could control the outcome; in the conclusion of The Magician’s Nephew, Aslan gives Digory an apple to heal his mother.

But life seldom imitates art. There is little doubt that Jack was haunted by Flora’s death for the rest of his life. He admits to Phyllis Elinor Sandeman on December 31, 1953:

“I can well understand how in addition to, and mingling with, the void and loneliness, there is a great feeling of unprotectedness and a horror of coping with all the things – the harsh, outer world – from which you have hitherto been shielded.  I first met this ‘cold blast on the naked heath’ at about 9, when my Mother died, and there has never really been any sense of security and snugness since.  That is, I’ve not quite succeeded in growing up on that point: there is still too much of ‘Mammy’s little lost boy’ about me.”

Flora’s absence left Jack and Warnie alone with their workaholic father. Jack wrote at length about his father’s lack of interest in his sons, mainly because Albert preferred to work. Did the young sons remind Albert of the painful loss of his wife?  Did he retreat further into his career as a coping mechanism? As Jack entered early adulthood, he nurtured a growing resentment for his father. This is evidenced in his correspondence, but is also mentioned in Surprised by Joy.  Jack mentions that Albert was less like a father, and more like a much older brother. Perhaps Lewis displaced some of his anger on his father. Jack and Warnie relied on each other for support, and struggled with their father’s ostensible lack of emotion.  Jack would later relinquish much of his pain and become more understanding of his father long after Albert’s death.

It is imperative to note that Jack was surrounded almost exclusively by males at Little Lea (not counting Aunt Annie); in other words, women were present in Jack’s early life, but mainly absent during his late childhood and early adolescence (a crucial period during which many males form opinions about the opposite sex).  After Flora’s death,  Jack found himself wisked off to school and away from his former sanctuary. He was placed in all-male boarding schools, where boys were mercilessly judged by their displays of aggression and athleticism.  Surely he missed his mother and felt that her passing had drastically altered the trajectory of his life (at minimum, it interrupted his childhood). Between the horrible bullying he endured to the emotional bankruptcy demonstrated by his father, Jack struggled to find footing in this unfamiliar new life.  Flora left a vacuum, a deep, unrelenting wound.  Jack would find himself utterly alone and seeking answers from God, from teachers, from schoolmates and colleagues. Her death would catalyze a long, labyrithine journey from God and a returning to God, truly proving that “the longest way round is the shortest way home”.

But in the meantime, young Jack would find refuge in one woman, a woman who became a surrogate mother to the “orphaned” boy and paid a heavy price for her affection.

Next week, I will share her story, the story of Ms. Cowie.

I’m struck by Lewis’s demeanor surrounding his mother’s illness and death. My own mother died at age 46 after a legthy bout with cancer, and I was a few years older than Lewis but not much. I think I dealt with it about the same way he did. I’d like to say that is one reason his writing resonates with me so much, but that would be a personal conceit unwarranted since so many people from dissimilar backgrounds also treasure his writings. In fact, my own similarities to Lewis are more numerous than our similarities.

Thanks for giving us insights to his youth and for making his family almost palpable, Crystal.