The book of Genesis tells us that Adam and Eve are our first parents.  Adam was alone in the utopia of Eden, so God borrowed a rib and made Eve.  The couple then rule unfettered over the land and beasts in Eden, but are prohibited from taking fruit from one specific tree: the tree of the knowledge of good and evil.  That should not be a problem, seeing that there are many “approved” trees in the Garden.  However, Eve’s curiosity is too much for her.  She is tempted by Satan to taste the forbidden fruit, then shares it with Adam.  After the suspicious snack, they realized that they were naked and hid from God.  For their disobedience, Adam and Eve were banished from Eden.

And we’ve all been cursed with that mistake ever since.

The burden of choice.  Many people have fought and died on battlefields both foreign and domestic for the idea of freedom.  Freedom means we have the right to choose.  No one can make decisions for us or force decisions on us.  But, thanks to the stain of sin, we cannot always be trusted with that freedom.  Sometimes we make poor decisions, we hurt others, we lie, we gossip, we steal, we cheat.  And the choice of Adam and Eve echoes throughout human history and contaminates the present.

Of Mans First Disobedience, and the Fruit

Of that Forbidden Tree, whose mortal tast

Brought Death into the World, and all our woe,

With loss of EDEN, till one greater Man

Restore us, and regain the blissful Seat…

Among the consequences of our first transgression is that man must now work the “soil” in order to be fed, women must now endure pain in childbirth, and death must be experienced.  The most significant and painful one, however, is the loss of Eden.  Here the couple had dwelled in pristene beauty, naming the animals and flowers, eating of the fruit, delighting in the presence of God.  And now, that place of delight and throne of God’s favor, had been taken away.  Milton continues:

Fit haunt of Gods? where I had hope to spend,

Quiet though sad, the respit of that day

That must be mortal to us both…

How shall I part, and whither wander down

Into a lower World, to this obscure

And wilde, how shall we breath in other Aire

Earlier in Paradise Lost, Satan complains that separation from God is a punishment in itself.  Now Adam and Eve, in their sin, experience this same separation.  The deep sense of loss is what C.S. Lewis used in his poem “The Ecstacy”.  Here, Adam and Even are outside of Eden, on the margins of perfection, lamenting about the loss of Eden through their own arrogance:

Long had we crept in cryptic

Delights and doubts on tiptoes,

We went on the the centre of

The garden, hand in hand, finger on lip.

On right and left uplifted

The fountains rose with swifter

Thinner and broader under the blinding sun.

The silence grips it; murmur

Of insect buzz nor business

Of squirrel or bird there is not –

Only the fluttering of the butterflies

Above the empty lawns, dance without noise.

So on we fare and forded

A brook with lilies bordered,

So cold it wrong with anguish

Bitterly our hearts. But language

Cannot at all make manifest

The quiet centre we found on the other side

Never such seal of silence

Did ice on streams or twilight

On birds impose. The pauses

In nature by her laws are

Imperfect; under the surface beats

A sound too constant to be ever observed

From birth its stroke with equal

With beat that never falters –

It stopped.  The permanent background failed our ear.

Said the voice of the garden, heard in

Our hearts, ‘That was the burden

Of Time, his sombre drum-beat.

True stillness dwells and will not change,

Who would not stay there, blither

Than memory knows? but either

Whisper of pride essayed us

Or meddling thought betrayed us,

We were outside, back in the wavering world.

Notice that the poem is written after Adam and Eve have reached “the outside”.  They remember the fountain flowing freely, creating “foamy plumes” as it feeds into a pond.  The garden is now silent; the buzz of insects cannot be heard.  Only the “fluttering of butterflies” above “empty lawns”.  As Adam and Eve attempt to survive on the “other side”, they notice a beautiful brook.  However, this image only inspires bitterness.  It is a fragment of the beauty they left behind, of the perfection lost by their sinful actions.

In stanza six, Lewis mentions a “dull rhythm” which continues infinitely.  In Eden, this endless staccato of Time did not exist.  Yet once Eden was lost, death is born.  Time (capitalization is intentional here) ticks on continually and “never begins nor ends”.

My main focus is on the last stanza.  It is one of deep reflection. “Who would not stay there…?” This world which now wraps around us is hopelessly flawed, similar to (and because of) our human nature.  The memories of Eden make it almost unbearable to live banished from it.  Remember the song of the birds? Remember the beasts we named? Remember the “good” fruit we ate?  All of that is a distant memory now.

The “doubt” Lewis hinted at in stanza one is the root of the issue.  Adam and Eve had everything, and yet, thought they could equal God in power. Satan, of all entities, would know what it is like to lose Heaven by wishing to usurp God.  He is so disappointed at losing Heaven, he resolves to spread his misery but making humans lose “Heaven on Earth” (i.e. Eden).  Humans now struggle with this same pride: “but either Whisper of pride essayed us/Or meddling thought betrayed us,/ Then shuddering doubt”.  The progression of pride and contemplation leads to “The Fall”.

Do we ever wonder “what if”?  What if Adam would have just taken an axe to that tree?  What if Eve would have just lassoed that snake like Walker Texas Ranger and tossed it to the far end of the garden?  But you see, the question “What if?” is what got us in this horrible mess in the first place.  What if we could be like God?  “What if” I can share God’s power?  We are too flawed to have such a burden.

Do not be mistaken, our culture still suffers from the sin of pride.  We see it when scientists deny the existence of God because faith is not “rational”.  We see it (and often feel it) when others condescend or think they are better than most.  We see it when a gift is transformed to a privilege or an elitist attitude- when someone who is blessed knows they are blessed. Humility, like Eden, is lost.

Why do we continue to lose our way?  Have we learned nothing since losing Eden?   Do we need the echo of the lost song of birds to ring in our ears like it did for Adam and Eve?  Must we remember the vision of “empty lawns” and cascading fountains to provoke us to live better?

At one time, we chose disobedience.  Now, let us choose the better path – one of obedience that will one day restore Eden to us. 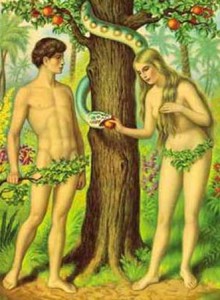