On the Shoulders of Giants…

I contemplated writing a blog about Christmas or tackling a challenge for the new year but last night changed all of that. 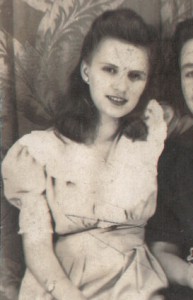 Several months ago, I wrote “Moving: Ends, Beginnings, and Continuums” about preparing my grandmother’s home for sale.  Earlier this year, she was moved from her three acres of rural bliss to a modest room in a local retirement home.  Dementia has slowly diminished her mind.  The spark in her eyes was replaced by an unsettling vacancy.  When it first began, she would have glimpses of confusion and episodes of disillusionment (a rare occurrence for a typically jovial woman).  She was well-known as a boisterous and friendly lady, a gentle soul.  I remember fondly her laugh, a full-throated cackle saturated with happiness and joy. During my childhood, my cousin Joey would push me around my grandmother’s property in a wheelbarrow. 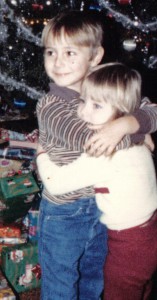 Together, we would explore the vast wilderness of her land: the mysterious woods, the brambles and thorn bushes, the old well.  It was an ecstasy of the senses – the blackberries were slightly sour on my tongue, mornings began with the shrill repetition of a rooster, the texture of tomatoes was slick and smooth as we pulled them from the Earth.  Her small garden patch produced a variety of vegetation, and I will always remember her posture, her slow and methodical pace as she visited each plant, inspected its progress, and gently pulled it from the stem if it was ripe. The sun flooded the valley as she would go, a bag of produce swinging freely on her arm. She would also attend to the chicken coop, where several nests revealed new eggs nearly every morning.  The eggs were freshly laid, feathers on their delicate shells.  Several eggs were brown or speckled and as a child, I remember thinking (rather erroneously) that they were not as “clean” as the white ones we sometimes purchased at the store.  Ultimately, she had tamed her small corner of the Virginia wilderness and worked it with her hands, her sweat. It was something of great pride, her carrying on of the agrarian tradition of her ancestors.

Those are the memories I invoke as I sit in her quiet room at the retirement home.  Nearly two months ago, my family sold the property in order to meet her financial requirements. Now, nearly conquered by dementia, she sleeps uncomfortably in a small bed. She has learned to tune out the dull roar of the oxygen machine and the occasional groans of other patients. After practice, she can easily ignore such cacophony. A small shelf and television display moments of her life, memories stolen over the last few years by a tyrannous disease. Her fingers (she was once employed as a seamstress) now curl idly beneath her blanket, rising only to scratch an itch or pull the sheet closer to her chin.

Last night, I visited with her while my parents met with Hospice. The doctors believe she only has months left and have asked my father to make the proper arrangements.  While my parents met with the nurse, I casually watched her and spoke softly to her, as my father and mother have done during her stay at the home.  Her rest was rather inconsistent, periods of dozing interrupted by uncomfortable squirming. Her food arrived, pureed into three distinct portions.  She stirred when the nurse entered. I arose from the chair and carefully began to feed her dollop-sized portions on the tip of a spoon (as my father has done).  Obediently, she would open her lips to welcome it. After a few bites, she rested.  I sat in the chair near her bed and quietly wept. How many times has she fed me over my lifetime?  I couldn’t resist the urge to contrast this quiet, tiny woman with the larger-than-life matriarch I knew. In all her current frailty, did the nurses know how she used to be?  Strong, independent, self-assured, generous, loving.  As evening filled the window, she quietly ate her food and sipped her milk. How many more evenings does she have?  And is it selfish for me to want her to stay when she endures so much pain, locked in a tired body with an untrustworthy mind?

Even as I watch her silently struggle, I cannot help but feel some sense of hope, even in the utter despair one often sees in a rest home. There is something reassuring in those well-known words from the Bible: “I have fought a good fight, I have finished my course, I have kept the faith”.  It is warm and comforting, after the long and arduous journey,  to collapse into the Father’s arms when you are tired from buffeting the storms of life. Power lies in those words, an exhalation of relief.  I ran my first 5K this year, and when I crossed the finish line, I could not describe the elation I felt. I hope that for her, it is the same.

Regardless of when she returns Home, I refuse to summon up these fresh images.  I prefer the old ones, the familiar ones. I want to remember her in all her glory: bent over her tomato plants as the morning sun streaks through tree branches or sitting contentedly in her pew at church highlighting pertinent verses in her Bible. Part of me wants to write her as a character one day, resurrecting that part of her I so admire (and honestly mourn).  She is passionately alive, in all her color and vitality, in my memory.  That is how she will remain for the rest of my life. I aspire to be like her, to have her fierce determination, her indomitable strength, her enduring faith. I know when I finally pass from these Shadowlands, I will find her again.  I will find her just as I remember and all will be restored. 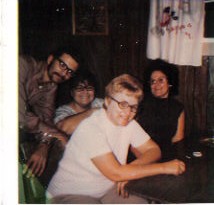 I don’t want to get preachy, but as we welcome in the new year tonight, please spend time with those you love. Understand that time is finite, and we are never guaranteed the next moment. I am not attempting to recycle old clichés, but enduring wisdom still has resonance today. You succeed because you stand on the shoulders of giants (as C.S. Lewis once wrote).  Even when those giants begin to atrophy, be grateful.  Hoist them up with the strength they inspired you to have.

I wish each of you a very happy new year!