Light in the Darkness (?): Miss Cowie, the Matron

Week Two of the C.S. Lewis and Women Series 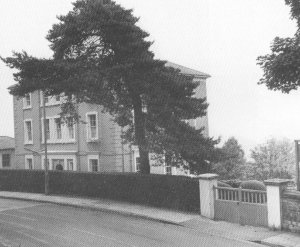 “Nothing was further from her intention than to destroy my faith; she could not tell that the room into which she brought this candle was full of gunpowder” (Surprised by Joy 60)

In September of 1908, Lewis was still secretly mourning the loss of his mother who had, a month prior, succumbed to cancer.  Lewis’s father Albert, disoriented from grief, sent his two young sons to continue their education at Wynyard School (what Lewis refers to as “Belsen” in Surprised by Joy).  Walter Hooper admits that this was “a terrible introduction to England” for the boys.  Now, not only was Lewis divorced from his dear home of Little Lea, he was removed entirely from his native Ireland.  Perhaps Albert assumed that distance would mend the boys’ broken hearts.

If that was Albert’s intention, it did little to diminish the grief of either son, particularly young Clive (“Jack”).  Wynyard, an instructional vessel steered by the tyrannous schoolmaster Reverend Robert Capron (affectionately called “Oldie” or “Oldy” by the students), was a poor choice.  In a letter written just days after the boys’ arrival, Warnie pleads with his father to remove them: “You have never refused me anything Papy and I know you won’t refuse me this – that I may leave Wynyard.  Jack wants to too” (Hooper 7). Albert chose Wynyard because its tuition was more affordable than other prominent schools, including Rhyl in Wales.  Albert wanted his boys to acquire the advantage of a public school education, one that would hopefully lead to acceptance at the prestigious universities of Cambridge or Oxford.  However, Wynyard would not suffice.  In addition to being adrift on the  “shoreless ocean of arithmetic” (pragmatic courses with little instruction in the arts), Lewis and the other boys were exposed to Oldie’s consistent fits of rage.  Walter Hooper, in C.S. Lewis: A Complete Guide to His Life and Works, writes that Oldie was facing legal action with the High Court on charges of brutality. In Surprised by Joy (SBJ), Lewis devotes several pages to Oldie, describing at length his intolerable, ineffective leadership.  He recalls Oldie’s severe punishment for seemingly frivolous crimes, of violently beating his cane across students’ desks while screaming, “Think.  Think.  THINK!”  Lewis writes in SBJ:

“In another way too Oldie’s school presently repeated my home experience. Oldie’s wife died; and in term time. He reacted to bereavement by becoming more violent that before; so much so that Wee Wee [Capron’s son] made a kind of apology for him to the boys. You will remember that I had already learned to fear and hate emotion; here was a fresh reason to do so” (33)

Both brothers begged to be released from Oldie’s oppressive grasp. In May 1909, Warnie moved to Malvern College. His little brother somehow survived Wynyard until 1910, when the High Court began pursuing charges against Oldie.  Shortly thereafter, the school collapsed. Eventually Oldie was declared insane (Jack described Oldie as “eccentric” in his first letter home – how perceptive the young Lewis was!). The youngest Lewis spent a semester at Campbell College in Belfast.  In January 1911, the Lewis boys returned to England, both now enrolled at Malvern.  C.S. Lewis attended school at the nearby Cherbourg House.  Here he was introduced to instructors such as Harry Wakelyn Smith (“Smewgy”), who played a significant role in fostering Lewis’s enduring affection for poetry.

It was also at Cherbourg House that Lewis met Miss Cowie (“Miss C” in SBJ).  She was the matron of the school, a compassionate and diligent lady who embraced the young Lewis as a surrogate son.  Miss Cowie paid extra attention to the “orphan” Lewis, as he mentions in SBJ:

“…I must begin with dear Miss C., the Matron.  No school ever had a better Matron, more skilled and comforting to boys in sickness, or more cheery and companionable to boys in health.  She was one of the most selfless people I have ever known.  We all loved her; I, the orphan, especially.  Now it so happened that miss C., who seemed old to me, was still in her spiritual immaturity, still hunting, with the eagerness of a soul that had a touch of angelic quality in it, for a truth and a way of life. Guides were even rarer then than now.  She was (as I should now put it) floundering in the mazes of Theosophy [Lewis’s friend and attorney Owen Barfield also practiced Theosophy], Rosicrucianism, Spiritualism; the whole Anglo-American Occultist tradition.  Nothing was further from her intention than to destroy my faith; she could not tell that the room into which she brought this candle was full of gunpowder.  I had never heard of such things before; never, except in a nightmare or a fairy tale, conceived of spirits other than God and men…But the result of Miss C.’s conversation did not stop there.  Little by little, unconsciously, unintentionally, she loosened the whole framework, blunted all the sharp edges of my belief.  The vagueness, the merely speculative character, of all this Occultism began to spread – yes, and to spread deliciously – the stern truths of the creed The whole thing became a matter of speculation: I was soon (in the famous words) ‘altering ‘I believe’ to ‘one does feel’.’” (59-60)

Miss Cowie introduced Lewis to a world of spiritual ambiguities, of enigmatic philosophies, and offered the young boy relief from his nagging conscience. She showed biased affection for him.  George Sayer mentions that Cowie “mothered” Lewis to what the administrators considered a disturbing degree. Sayer also revealed that Cowie’s dismissal originated from the long, nurturing embraces she had with Lewis, as well as her insistence that his letters home did not require censorship.  All letters home were read by school staff, a practice that the young Lewis found “disgracefully tyrannical” (Sayer 31).

But one must remember that the young Lewis was thirteen during this time.  This is why the administrators were alarmed when they found Cowie “holding Jack in her arms”.  He was on the cusp of adolescence and maturity, and other adults found this strange attachment unbecoming and inappropriate. Malvern, on the surface, had been a pleasant experience.  But Lewis reveals in SBJ that he was mercilessly bullied by the older boys and mocked for his apparent lack of athletic skill.  Here, he found an ally, a woman who in the absence of his mother had showered him with feminine affection.  Now, she was promptly removed from his life, leaving him at the mercy of the bullies and the lofty pretentions of the schoolmaster and instructors (Sayer mentions that headmaster A.C. Allen was a good teacher, but “lacked” the ability to “be able to identify students who might need help with emotional problems”). Furthermore, Miss Cowie’s philosophical cocktail had left Lewis asking uncomfortable questions about religion, questions that contradicted and perhaps negated the principles discussed in his grandfather’s pulpit.  Perry Bramlett writes in the essay “Lewis the Reluctant Convert: Surprised by Faith”, “There was no deliberate attempt by her to destroy Lewis’s faith; her singular manner of religious and spiritualistic questioning seemed so exciting that Lewis’s conventional religion by contrast, seemed dull and unattractive” (C.S. Lewis: Life, Works, and Legacy edited by Bruce Edwards 107).

Despite this brief flirtation with rationalism, Lewis would eventually return to Christianity.  This complicated journey equipped him to speak to religious skeptics about the “discrepancies” between intellect and faith.  After time at Malvern, Lewis came under the tutelage of “The Great Knock”, his father’s former tutor Mr. Kirkpatrick.  Kirkpatrick assisted Lewis for the Oxford entrance exams known as Responsions. Lewis performed poorly on the mathematical section, but was offered admission as part of the Officer’s Training Corps.  Europe was going to war and Lewis would find himself, just a few years later, engaged in the Great War.  This was not the romantic notions of war depicted in Homer; this conflict acquainted him with the hideous face of death he had first glimpsed with his mother, but would also lead Lewis to another woman, one he would refer to in later correspondence as “Mother”.  However, the true terms of their relationship continue to stir controversy today.

Next week, we discuss “Furlough and Fascination”, the inimitable (and married) Mrs. Moore.

C.S. Lewis: A Complete Guide to His Life and Works – Walter Hooper

C.S. Lewis: Life, Works, and Legacy (4 volumes), edited by Bruce Edwards (I HIGHLY recommend you acquire this set. It is an asset to my personal library!)

The vagueness of the occult was a theme he explored at length in That Hideous Strength, wasn’t it Crystal? Thanks for giving more of the background into his works.

Thanks for the comment Tim! That Hideous Strength explores what Lewis called “Scientocracy” or the evolution of science as a religion and vehicle for political power. N.I.C.E. accumulates land, conducts egregious experiments, and perpetuates propaganda on it’s quest to become a government, essentially. It attempts to replace government and religion. Lewis illustrates how science, like all things, needs to stay in check. It is not a means of salvation.

You are always welcome here Tim! Thanks for the comments!