Lessons from Lucy: A Dog, a Barn, and Dreams of Oz

“Yes, we saw a dog”, the neighbor child affirmed with wide eyes.

She and her brother were out playing when my husband approached, inquiring if they had seen a dog. He was sweaty and gasping for breath; it was his third trek around our neighborhood.  No, he did not implement a new and strenuous exercise plan…

But let us back up several years before this moment which occurred last week.  My husband and I are nothing if not dog lovers.  We have three dogs, all rescued from shelters who, because we have no children, serve as four-legged progeny in the Hurd house. I love to read dog books (yes, I cried when I read Marley & Me, okay?).  Dog books are one of my favorite genres when reading for pleasure and relaxation.

My fondness for dogs started when I was young.  As a kid, I watched Lassie and begged my parents for a collie.  Every time little Timmy was in a scrape, he would call for Lassie and she would come running from another corner of the Earth to rescue him. Despite Timmy’s penchant for falling into trouble, Lassie was always there.  Collies are absolutely beautiful creatures, but are rather expensive and hard to come by.  After months of pleading, my grandfather found a couple who needed to give away a dog.  It wasn’t exactly a collie, but it was still a magnificent, beautiful canine.  We adopted him and named him Brandon after Punky Brewster’s dog (I’m a child of the 80s!). 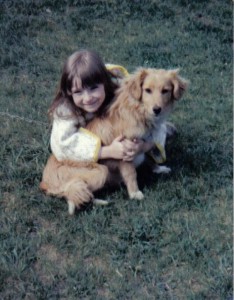 After getting married, most people expected us to start having kids.  Neither of us was ready though, so we decided to adopt a pet.  I wanted a cat (because it uses the bathroom in a litterbox and therefore, had the allure of self-maintenance), but when Aaron went to the animal hospital, a small, tan-colored dog was on display in the front office.  She was enthusiastic and friendly, wagging her tail at everyone who stopped by to acknowledge her.  Aaron asked if he could check out the dogs instead of cats.  When she was placed in the room with Aaron, Eppy wagged and licked her way into his heart.  When I called after work that day expecting a cat, I heard barking in the background and knew Aaron had unpredictably made a swap. Later that day, Eppy would steal my heart as well, although it took me a while to warm up to her since she still needed some encouragement to become house-trained.  She turned out to be the best “child” a dog mom could ask for. 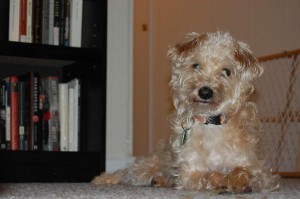 After having Eppy for two years, we considered adopting a second dog to keep Eppy company during the day.  We started scouting local shelters.  A student of mine stated that her sister’s dog, a miniature schnauzer mix, had recently had puppies and the family needed to adopt them out quickly.  If not, her family would be forced to take all nine puppies to a shelter.  She brought them to school one day and I was smitten upon our first meeting. 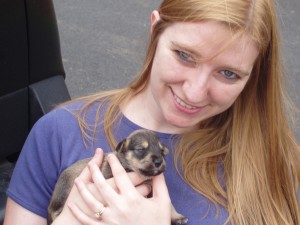 At around four weeks, I took Lucy home (I’m sure you can figure out why her name is Lucy, right?).  She was so tiny that she couldn’t escape from the cardboard box I carried her home in.  Eppy was not happy about sharing the limelight.  She informed us of her discontent with several “accidents” on the carpet.  I assume you can call them accidents, although I’ve never seen a dog glare and urinate simutaneously but she did it with ease.  Nonetheless, Eppy would eventually get used to Lucy.  Lucy, though, had a multitude of tricks (and attitude) which equalled, even surpassed, her sister’s.  She was rambunctious and a little mischievious.  She was well-acquainted with the rules, but to our frustration, Lucy looks at rules more like a buffet: I don’t need ALL of them, I can choose which ones work best for me. 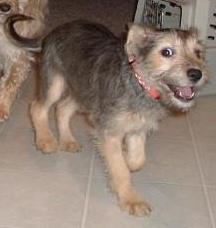 Five years later, Lucy is still picking and choosing which rules to obey.  She has recently developed a tendency to run off and explore the surrounding landscape at our house. She broke not one, but TWO leashes just last week.  I have joked that we need to rename her “Hercules”.  Lucy heads straight for  the old, picturesque barn near our back yard. It is full of rusty junk; in fact, one whole side is missing.  Last year, a series of rough winds (one a tornado which devastated a local town) weathered the barn significantly.  Planks are missing from nearly all sides, tin shingles from the roof are absent, and when the wind blows, it quietly whistles through the crevices.  The structure frequently creaks, protesting every time a stiff wind trespasses the walls (although the owner put a “No Trespassing” sign on it earlier this year).

Lucy is obsessed with that barn.  She is highly allergic to our carpet, which we are strategically replacing with hardwood as budget permits.  But in the meantime, Lucy is confined to the linoleum fortress which is our kitchen.  The barn is directly behind our home, in close proximity.  Every morning, Lucy watches as the sun rises, filtering its glory through the barn’s fractures.  She observes as the local cats stroll up and down the dirt road beside it.  At night, that barn seems to swallow up the light as the sun disappears inside it.  It is the primary object in her field of vision both day and night.  Certainly, it would arouse some curiosity.  Time has only deepened her suspicions and wonder of the place.

If Lucy could understand English, I would tell her that she is chasing Oz, a figment, an illusion.  She dreams of visiting that barn and seeing for herself what is so mysterious about it, but there’s nothing there for her.  No lifetime supply of squeaky toys, no endless inventory of chew bones, no tasty treats, no never-ending waterfall of dog kibble.  There aren’t theaters showcasing episodes from Animal Planet, and there sure isn’t any human food to steal.  It’s just a storehouse for broken bottles and unused supplies from former construction projects  The rest of the myth is often self-generated, either by imagination or belief coaxed by persuasion. 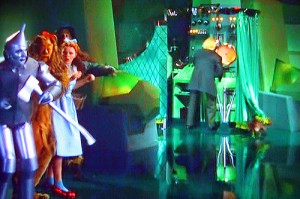 When Lucy broke free from her leashes, she headed directly for the barn and the weeds around it.  She sniffed the area quickly, covering several feet in the blink of an eye (knowing that her screaming owner was in hot pursuit, no doubt).  When I recovered her, I looked down into her brown eyes and inquired (rather emphatically) why she is running away from safety.  Here, she is fed and given chew bones and toys.  Here she has a warm bed protected from the elements.  Here she is cared for.  Why would she wander anywhere else??

Later, after brooding over the broken leashes, I became suddenly sympathetic.  Lucy, in her ennui, can’t help but be curious.  How many times have I stepped outside of safety to satisfy my own curiosity?  People around me warned that life outside that margin would prove difficult.  I ignored them and did it anyway.  Later, I returned limping but wiser for the experience.  I thought, “But if you go here, the grass will be greener”…but it wasn’t.  That gleaming emerald city was no more than a dilapidated shack.  My mind had constructed an ideal and I found, at the end of the yellow brick road, a vastly different product than I had anticipated.

But at least you also find some wisdom at the end of that road.  You know better.

Lucy has a new leash now.  It is adequate for a 110-pound dog and Lucy is only around 25 pounds (!).  So far it is holding up just fine.  I can still get frustrated with her at times, but she is teaching the teacher some valuable lessons about life.  Sometimes you have to sniff those weeds before you realize they are weeds. You have to walk the yellow brick road and experience it yourself to learn what lies beyond it. And even if you leave (physically, emotionally, spiritually), you can always return to soft beds, nourishment, and open arms. 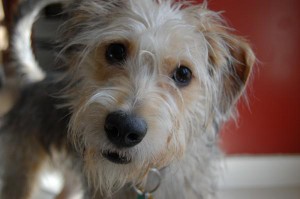 Crystal: Great piece. I admit that I read all of Jan Karon’s “Mitford” series primarily because the main character is a pastor who owns a big dog that is his jogging partner! Here’s a piece I wrote when my dog, Joey, died a few years back. Thought you might relate: http://djackson.stscs.org/?s=joey

Thanks for the link to your article Doug! I have such a weakness for books which feature canines. I definitely have “dogs as kids” syndrome. They truly are kind companions and blessings from God.