Five Reasons Why I Admire C.S. Lewis: A Birthday Post

Let it be granted that I do approach the poet, at least I do it by sharing his consciousness, not by studying it.  I look with his eyes, not at him.  He, for the moment, will be precisely what I do not see, for you can see any eyes rather than the pair you see with, and if you want to examine your own glasses you must take them off your own nose. The poet is not a man who asks me to look at him; he is a man who says, ‘look at that’ and points; the more I follow the pointing of his finger the less I can possibly see of him.   – C.S. Lewis, The Personal Heresy  (11) 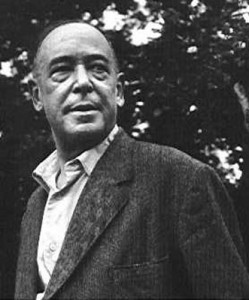 Tomorrow is C.S. Lewis’ birthday. He would be 114 years old.  To celebrate, I want to share with my readers the reasons why I admire Lewis so much.  As most of you know, I wrote my dissertation on C.S. Lewis as Transformational Leader.  After months of research and a trip across “the pond” to walk in his footsteps, I found that my fondness for Lewis deepened with time. At first glance, it would appear that a girl from the Appalachian Mountains would have nothing in common with an Oxford don. But on the contrary, Lewis and I share many great qualities – an Irish heritage, a love of literature, and most importantly, a desire to strengthen faith in God.

So before we indulge in the birthday cake, let’s take a look at the five reasons I admire C.S. Lewis:

5. Lewis engaged my imagination. Last year, when I attended the C.S. Lewis tour in Belfast (with Sandy Smith), I had the distinct pleasure of travelling with retired Irish schoolteachers.  During tea time, one of the ladies approached me and asked how I came to know Lewis.  When I mentioned Mere Christianity, she was surprised.  “I figured at your age, you read Narnia first,” she exclaimed.  I didn’t read Narnia until later in life, while I was preping to write the dissertation.  Until then, I had been primarily concerned with Lewis’ apologetic works.  However, The Chronicles of Narnia introduced me to a whole new world and a whole different side of Lewis. Lewis “baptized my imagination” (as MacDonald’s Phantasies did for him).  It’s okay to read “kid stories”, because they contain a seed of wisdom that we often neglect in our adulthood. (For more information on this, read Lewis’ essays “On Three Ways of Writing for Children” and “Sometimes Fairy Stories May Say Best What’s To Be Said” from Of Other Worlds).

4. Lewis shared my love of literature. As a nerdy bookworm, I lived my life experiencing other worlds vicariously through famous literary works. Nestled between two covers, a tale can transport me to places real and imagined. It can bring to my nose fragrances I have not smelled, or display sights I have never seen.  Because of Homer, I have heard the sirens warble to Odysseus.  Because of Dickens, I have heard the groan of the great, towering machines which powered Victorian England.  Because of Tolkien, I have trembled to enter the dark shadows of Mordor.  Because of Lewis, I have felt the calming presence of Aslan when I was afraid.  Authors have unparalleled access into our heads.  They can plant images and ideas there, seeds which can blossom into a great harvest of imagination and intellect.  Lewis is one of those great farmers.  His impact is wide and his harvest is abundant.

3. Lewis illustrated the art of integration. One of the major themes of my research on Lewis was his integration of faith and intellect & intellect and imagination.  Many argue that faith and intellect are natually opposed, and cite the scientific revolution of the Victorian period as proof that the two cannot coexist peacefully. Lewis was well aware of this. However, he argued that ultimately humans prevent a reconciliation between faith and science.  Knowing how an automobile operates does not negate the presence of an engineer. When we arrogant humans began making scientific discoveries, we foolishly dismissed our notion of God as “mystic”. When we should have been in awe of the divine design, we chose pride instead. Since the Garden of Eden, we have continually made that choice.  And yet, we are ensnared in those same traps.  Progress indeed!   Also, Lewis shows us that a world-class scholar can write a successful children’s series.  Lewis was not plagued with the arrogance and condescension of his contemporaries.  Professors are still people.  Lewis wanted to reach all readers, not simply the erudite.

2. Lewis was a true leader.  Our culture often characterizes leaders as politicians, administrators, and managers. However, leadership expert Peter Northouse defines a leader as an individual who influences a group of people to achieve a goal. That goal does not necessarily require sales charts or analytic data.  The goal can bring people closer to Christ or  illuminate some truth in order to assist in understanding.  Leaders do not require a title.  Leadership doesn’t begin when one achieves a job promotion or earns a new position. Titles do NOT qualify leaders. Effective leaders, like Christians, should be measured by their fruit.  As I stated in an earlier blog, the best leaders are servants. Lewis consistently (and privately) put others above himself. He took care of Paddy Moore’s mother after he was killed in action. He gave an estimated half to two-thirds of his income to charity.  He personally responded to each letter he received. He married an American poet to (initially) extend his British citizenship.  Examples of his generosity abound. Most of all, he never boasted of these things. He simply carried on, giving what he could.  Evidence of Lewis’ influence are everywhere. He is the true definition of leadership.

1. Lewis reinforced my faith in God.  I’m not going to lie. Attending courses at a secular university challenged my faith.  I struggled with the great myths.  I questioned the beliefs that were instilled in me. To me, “open mind” meant “ambivalent faith”. Lewis assured me that it was okay to marry my faith and intellect, to essentially integrate. He spoke the truths I could not articulate. He restored to me the wonder of God I secretly wanted to recover. He firmly proclaimed that I don’t have to compromise intellect to embrace spirituality. What a relief!  Below is one of my favorite quotes of Lewis from Mere Christianity.  It has never stopped humbling me, nor has it failed to penetrate the callouses I’ve developed over years of resentment and disappointment:

If I find in myself a desire which no experience in this world can satisfy, the most probable explanation is that I was made for another world.  If none of my earthly pleasures satisfy it, that does not prove that the universe is a fraud.  Probably earthly pleasures were never meant to satisfy it, but only to arouse it, to suggest the real thing.  If that is so, I must take care, on the one hand, never to despise, or be unthankful for, these earthly blessings, and on the other, never to mistake them for the something else of which they are only a kind of copy, or echo, or mirage.  I must keep alive in myself the desire for my true country which I shall not find till after death; I must never let it get snowed under or turned aside; I must make it the main object of life to press on to that other country and to help others to do the same.

The work of C.S. Lewis was the metaphorical “glasses” I needed to see the Truth clearly. Although he left us nearly 50 years ago, his words still possess much relevance. When we discuss his works, when we mull over his theology, when we read Narnia to our children, we are keeping a small piece of Lewis alive. We are perpetuating his influence.  Most of all, we are sharing those spectacles with others. and looking beyond the poet to the Great Author. 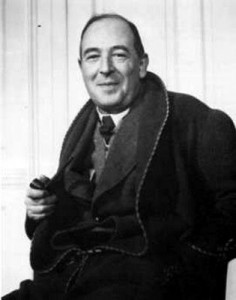