Who Put Something in my Cake?: A Review of Peter Jackson’s The Hobbit 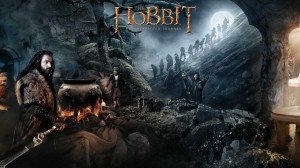 In J.R.R. Tolkein’s story “Smith of Wooten Major”** the village cook Alf is preparing to bake a grand cake for a Feast of Twenty-Four, a children’s feast celebrated once every twenty-four years and celebrated by twenty-four selected children.  A bit of a novice and quite nervous about the feast, Alf searches his kitchen for small treasures to place inside the cake.  While pillaging through his shelves, he remembers a strange black box left by his predecessor.  After he discovers it on a high shelf, Alf lifts the weathered lid to find a small star, “made of silver but…tarnished”.  Alf’s apprentice, Nokes, informs him that the star is indeed special – it is a “fay”, a star hailing from Faery. Alf ignores Nokes and places it in the cake, where a boy named “Smithson” nearly swallows it. Smithson, perplexed by the peculiar object on his tongue, spits the star out and places it on his forehead, where it stays throughout his life. He realizes that the star grants him unparalleled access to the Faery world.   Smithson (later called “Smith”) could visit the Faery world and return to a time of magic and wonder.  Smithson becomes a successful craftsman, wielding iron into beautiful shapes inspired by the images he sees in another reality. Smithson, as an adult, sometimes escapes into the Faery world, deep into an enchanted wood.  His adventure and interest into another world never ceases.

But who put something in my cake?

As an only child, I escaped into distant lands via storybooks.  My parents read to me as a child, and I longed to drift into these magical worlds.  There was something charming about the escape. I had a wonderful childhood and stories only enhanced these experiences.

As I matured, I didn’t want to completely relinquish these stories. I enjoyed them but let’s be honest, it is completely uncool to discuss simple “kid” stories in college, with the analytical minds of the undergraduate English department. I couldn’t tell my English major friends, who had their heads down in a volume of Dostoyevsky, that there was still a twinge of delight at the old enchanted tales.   I read the required reading, usually darker novels; I was especially fond of the moderns.  I wanted pain.  I wanted anguish.  I wanted a complete dismantling of the old paradigms.  “Do I dare disturb the universe?” T.S. Eliot asked.  Disturb? I wanted a whole new order to sweep in and lay waste to the old traditions. I wanted to tear down the ivory towers of optimism and view humanity in all its brokenness.  The uglier, the better. I began to perceive optimistic works as juvenile. A modern mind would surely embrace the darker subjects (a rather “priggish” way to approach literature, I might add). I read thriller novels later, but even then, a vestige of those ancient stories remained.  The “good guy” should triumph and the “bad guy” should suffer.  This was the cherished tradition of the great tales. I eventually made my way back, quite delightfully, to the stories of my youth.

C.S. Lewis writes that fairy stories should not be read exclusively by children, but enjoyed well into adulthood.  Furthermore, fairy stories tickle that yearning we have for our “homeland”.  There is ethereal existence beyond our realm and even as adults, we can be drawn in, as Smithson was, to the vivid and magical worlds we embraced as children. Someone “put something in our cake” and we still desperately long to escape to these beautiful lands as the years pass.

That excitement emerged in me as I stood in line to watch The Hobbit last weekend.  I tightly clasped my 3D glasses with soaring hopes of a wonderful adventure. And I experienced one. As many of my colleagues have pointed out, there are (and always are) textually inaccuracies when a story is translated from page to screen. If you entered the theater a purist, you leave shouldering a fair amount of disappointments. I have actually taught The Hobbit (although it has been a while) so I already have my own preconceived notions.

However, as Sorina Higgins suggested before the film opened (http://iambicadmonit.blogspot.com/2012/11/packing-for-unexpected-journey.html), we need to leave The Hobbit at home.  It is a rare occurrence when such retellings remain faithful to the original works. Honestly, it shouldn’t reflect complete originality because essentially the story is told through the interpretive lens of someone else. Such other “interpreters” include the great William Shakespeare. My fellow Muse Andrew Lazo explains this concept very well in his latest post for All Nine (http://allninemuses.wordpress.com/2012/12/19/incarnational-invention-peter-jackson-retells-bilbo/). Only Tolkien can accurately tell his own story, so if you insist on authenticity, you are better off staying home, saving your money, and rereading the books.

Also, the film was not made for “Tolkienians” alone, as Donald Williams states (https://www.facebook.com/note.php?saved&&note_id=10151363762220520).  To appeal to such a large audience, Jackson uses broad strokes to tell the story.  In this way, some of the text is sacrificed.  However, Jackson attempted to remain faithful to the mythology Tolkien created, focusing his attentions on how The Hobbit fits into a long chronology of Middle Earth history. In fact, as others have noted, Jackson used many other Tolkien works, such as The Silmarillion, to complement his story. Most casual moviegoers will be unaware of such parallels. Jackson, I believe, had to step back and look at the overall result, which considering the long history Tolkein created is an ambitious task.  Will people think this is a good retelling? Does it have adventure and suspense? Those elements usually determine what is included and excluded in the film.

As for me, I enjoyed the film immensely.  Did I cringe at some of the changes? Well, yes. I think the Dwarves singing while they pillaged Bilbo’s house was unnecessary. The “pipe-smoking” chant was nice, however. I also have to side with Donald Williams here – a rabbit-led sled?  Seriously? Radagast, are there no other animals available?  Rabbits are far down my list of optimal creatures to pull me out of danger, especially when I’m being chased by a bunch of savage orcs. I don’t have too many qualms with the eagle scene, although I’m glad they were ALL in advantageous positions when everyone clings to life over a cliff.  The only other scruple I have with it was that, during the latter part of the movie, I felt that Bilbo’s story becomes secondary; Bilbo is almost relegated to a minor character. True, he was only “the thief” of the crew, but Jackson takes great pains to establish Bilbo as a home-loving, introverted creature in the beginning of the film (and thus one who is conflicted about going on an adventure).  At one point, he seems to completely disappear from the storyline. And no, not because he used the ring…

All in all, it is up to us to determine the yard stick with which we measure the film.  William O’Flaherty shared his criteria for judgment here(http://lewisminute.wordpress.com/).  When I left the theater, I asked myself, “Was I entertained? Was it worth the money I paid?” To this, I had to answer a firm “Yes”.  I really enjoyed the film. For nearly three hours, I was swept away into the climes of Middle Earth.  I went to Rivendell and overlooked the cliffs of the mighty mountain.  I watched intently as Bilbo and his scrawny antagonist Gollom exchanged riddles.  And I saw the vast fields of Hobbiton unfurl before my eyes.  I and a room full of strangers went on a marvelous journey together, with stars blazing brightly on our brows.

**This and other tales can be found in Tolkein’s Tales from the Perilous Realm. 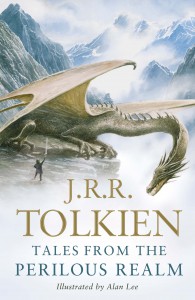