What a Picture’s Worth: A Beloved Photo Returns to France after 70 Years 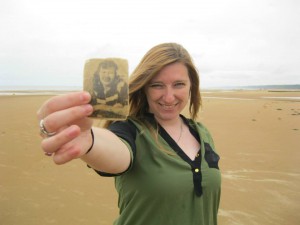 Just last week, on a drizzly Sunday morning, I stepped foot on Omaha Beach. Sand crunched beneath my sneakers as I surveyed the deceptively tranquil shoreline. As gulls circled politely overhead and low tide massaged the beach’s edge, I took inventory of the sad, tragic events that occurred seventy years prior. It was a sobering vision juxtaposed against our contemporary luxuries. How soon we forget and forsake those who dodge enemy bullets to defend our freedom.  The vestiges of German bunkers, now eroded stone, peered down from the incline’s precipice. 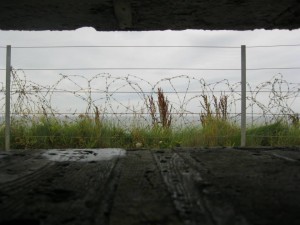 I couldn’t erase the images of D-Day from my mind, pictures of young Americans wading confidently with weapons and sacks to confront a ruthless enemy. Wounded and deceased bodies stretched across the sands as the ricochet of gunfire and screams reached a long, painful crescendo. Still they fought. They encroached enemy territory certain of victory and on the now becalmed shoreline, they would accept no less.

That quiet Sunday, there were no enemies, no artillery, no conflict. It’s just me and the picture I clasped in my hand. 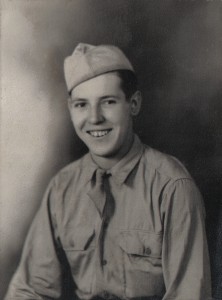 Paul upon entering the service

In 1944, my grandfather Paul Ashley was drafted into the army and immediately reported for duty. He trained for several weeks, making new friends and learning survival skills as well as techniques of warfare. Before leaving out for training, he stopped by a local restaurant with another brother-in-arms. Both were in uniform. He spied, across the little shop, a lovely brunette chatting and laughing with her cousin. Paul didn’t know the name of this mysterious and beautiful woman, but a man who goes to war knows that time is of the essence. He couldn’t work up enough courage to approach her that day (a man can bravely face enemy fire, but not timid, pretty girls!). Instead he chose to admire her from afar, casually observing her as she was consumed in conversation. Later, he would write to the cousin (an acquaintance) and ask permission to send letters to her enchanting relative, a West Virginia native named Irene. “Which one?” Irene curiously asked. When she discovered that it was Paul, she was delighted and enthusiastically agreed. Thus began the correspondence that would lend encouragement through the dark trenches and unforgiving forests of WWII and eventually lead, happily, to a marriage and seven children. 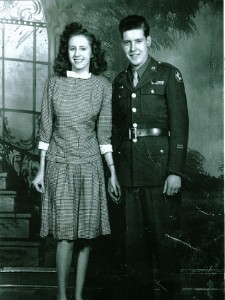 Several months after D-Day, Paul landed at Omaha Beach, the infamous site of Allied capture. The waters, he recalled, were still tinged pink, an ominous reminder of the events that preceded his arrival. His predominantly peaceful introduction to Europe was short-lived. He travelled to Belgium and Luxembourg to begin an arduous, bloody winter in the Ardennes Forest, participating in the Battle of the Bulge. His valor earned him several medals, along with a Purple Heart and Bronze Star. He was wounded by shrapnel, which he removed himself with tweezers.On another occasion, he carried his superior officer to safety through relentless gunfire (the officer unfortunately succumbed to his injuries). On Christmas Day, as he was eating rations, Paul was surprised by a bomb landing nearby, a bomb that never detonated. He called it a “dud” (but I call it Providence). All this time, during the fearful uncertainties of battle, Paul would pull out a lone picture of his girl, that same beauty from the restaurant. He cherished her letters, her sweet notes of optimism. After his return, he always kept that photo in his wallet. That was where it was on the day he died in March 2004. 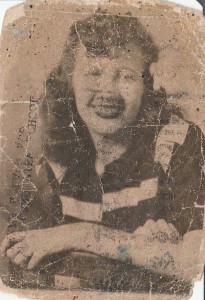 “Take it easy dear. Yours with love, Irene“

And that is where I come in. In college, I interviewed my grandfather about his war experiences for a paper. He talked of his rations, of the French villages and German countryside, of the blending of armies united to fight an evil regime. After the interview, he showed me that photo, still in his wallet as the girl was still in his heart. After his death, I ran across the photo in an album. Remembering his deep attachment, I asked my grandmother if I could have it; she agreed. I was delighted to possess something that meant so much to him.

Now, here I am, seventy years after his arrival standing on the very beach upon which he first stepped into enemy territory, a sacred place where his brothers fought and died. I pull out that photo, the same smiling face now surrounded by worn edges, creases, and a small tear, and lift it to the breeze. This is where it started for my grandfather, but it is not, thankfully, where it ended. I envision the futures which vanished in the gun smoke, surrounded by the ghosts of progeny who never were, as so many young men took their last breath here. The pregnant silence, the soft wash of the shore is all I hear now. As I look across the sandy expanse, I am overwhelmed by their sacrifice and humbled by the opportunity to visit the very places he travelled throughout the war. How many nights did he recall the charm of those little French villages? Of brotherhood? Of undiminished hope, even as the cold German winter stung his face and numbed his limbs? 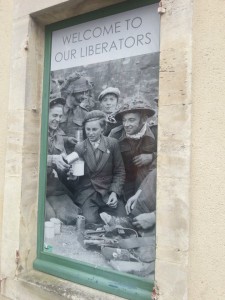 I wish, as a child, I had paid more attention. I sincerely wish I had, before atrophy began stealing his memories, written down with more detail the places and events of his time at war. As the Greatest Generation shrinks, we must realize how impoverished we are in its absence. It is their strength, resilience, and resolve that we must carry with us. It is their legacy and as children and grandchildren, our inherited responsibility.

After a few moments, I place her back in my pocket. That beloved image – her ebony hair, warm smile, the handmade dress. She returned to France once again after seven long decades. As my grandfather did under very different circumstances, I pull it out to admire her, to think of all of the places she has travelled. I reflect on the sacrifices which purchased my freedom, which grant all of us new opportunities. That is why I carried her with me. I brought her back to remind myself of the miracle of life, which can be abbreviated with a single bomb or bullet. I brought her back to find a piece of myself in those tiny village corridors and in the echo of the ocean.

But most importantly, I brought her back to remind myself that freedom is never free.

What a beautiful journey, Crystal. That lonely stand you took on Omaha Beach doesn’t sound so alone when I consider your grandfather and grandmother being there with you, the picture and the memories you held keeping you company.