The Importance of Wounded Butterflies

Earlier this summer, Ray Bradbury, a great American literary monolith, passed away at the age of 91.  Bradbury wrote such classics as Fahrenheit 451, and a myriad of great short stories.  Among these is a story titled, “A Sound of Thunder.”  Today, I teach this story multiple times a year and I enjoy it increasingly more because it has a personal significance.

The story’s protagonist, Mr. Eckles, lives in the year 2055.  In the future, time travel is not only possible, it is a lucrative business.  Time Safari Inc. ensures that its presence in the past will not alter future events.  Eckels pays to hunt and kill a Tyrannosaurus Rex, one already identified as succumbing to a falling tree without the trespassing of visitors.  Mr. Travis, the tour guide, informs the travelers that they must stay on the path.  If not, they could alter time forever.  When Eckles asks why stepping on a mouse would cause such historical disturbance, Mr. Travis explains,

“Well, what about the foxes that’ll need those mice to survive? For want of ten mice, a fox dies. For want of ten foxes a lion starves. For want of a lion, all manner of insects, vultures, infinite billions of life forms are thrown into chaos and destruction. Eventually it all boils down to this: fifty-nine million years later, a caveman, one of a dozen on the entire world, goes hunting wild boar or saber-toothed tiger for food. But you, friend, have stepped on all the tigers in that region. By stepping on one single mouse. So the caveman starves. And the caveman, please note, is not just any expendable man, no! He is an entire future nation. From his loins would have sprung ten sons. From their loins one hundred sons, and thus onward to a civilization. Destroy this one man, and you destroy a race, a people, an entire history of life. It is comparable to slaying some of Adam’s grandchildren. The stomp of your foot, on one mouse, could start an earthquake, the effects of which could shake our earth and destinies down through Time, to their very foundations. With the death of that one caveman, a billion others yet unborn are throttled in the womb. Perhaps Rome never rises on its seven hills. Perhaps Europe is forever a dark forest, and only Asia waxes healthy and teeming. Step on a mouse and you crush the Pyramids. Step on a mouse and you leave your print, like a Grand Canyon, across Eternity. Queen Elizabeth might never be born, Washington might not cross the Delaware, there might never be a United States at all. So be careful. Stay on the Path. Never step off!”

When Eckles arrives in the past, he becomes frightened and tries to forfeit.  However, he cautiously ventures out on the path, is petrified when he encounters the Tyrannosaurus Rex, and slips off, leaving a bootprint in the viscous mud beneath. Mr. Travis reprimands him for disobeying orders as the machine winds through years and years of history to return to the present.  When they arrive, the language is different and the politician who just won the presidency is a different candidate.  Eckles turns over his boot and discovers a single, beautiful butterfly.  He had carried it into the present, ultimately altering the past.

Amazing how much one butterfly can drastically change the future.

In fact, it was just nine years ago that I was on the precipice of such change.  After returning from college, I secured a customer service, “cubicle”  job.  In my community, these jobs pay well, but I knew deep down that it is not what I wanted to do long-term.  In the summer of 2003, a nearby school system offered me a job as a P.A.L.S. aide.  P.A.L.S. is a remediation program which helps struggling readers learn; the aim is to shrink the gap between good readers and struggling readers in elementary school before time compounds the confusion and leads to student frustration and lower test scores.  At the same time, I was offered another well-paying position in customer service.  P.A.L.S. would only offer me $6.45 an hour of part-time employment while the customer service position offered me full-time hours, benefits, and $10+ an hour.  Most people would easily choose the latter, but I was still very conflicted.

After the interview for the customer service position, I ventured to a store next door.  Before reaching the entrance I paused and did a doubletake.  Laying on the concrete, lifeless yet beautiful, was a vibrant turquoise butterfly.  It was crushed on the pavement.  The contrast is what had caught my eye.  This lovely symbol was juxaposed against grey nothingness, trampled by pedestrians.  Even in death, it possessed an indescribable beauty. Something inside me said, Do you surrender to your desire to have more “stability” or do you chase your destiny?  You know what you are supposed to do. Don’t dispose of your opportunities.  Make the right choice.  From the moment I laid eyes on that butterfly, that one lone butterfly, I knew that the trip had been a waste.  I was destined to take the P.A.L.S. position.

Thus began one of the most incredible experiences of my life. Helping a child read his/her first words is truly amazing.  Teaching children to read introduces them to a whole new perspective, places full of mysterious wardrobes, of young orphans studying wizardry, of hobbits travelling distant lands; ultimately it grants them exposure to endless journeys and new, whimsical worlds.   By the end of the following school year, all of my students were reading.  They all passed the P.A.L.S. end-of-year assessment.  I was so proud of them, my heart felt like bursting.  Later that summer, I was hired to teach high school literature, where I will begin my ninth year of instruction this week.

It’s incredible how one image remains with you.  You sigh when you reflect, but you understand the choice and sacrifice you made in that moment which forever changed the trajectory of your life.  That one insect gave me the confidence to choose the path I already knew I must take. 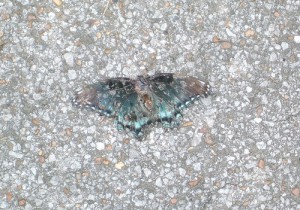