During his final interview in May 1963, C.S. Lewis claimed that his role in his own conversion was surprisingly passive.  One simply makes a decision to follow Christ, but Lewis sees his conversion more as a recognition of “being chosen”, not necessarily of “choosing”.  “I was glad afterwards at the way it came out,” Lewis admits, “but at the moment what I heard was God saying, ‘Put down your gun and we’ll talk.’”

What irony saturates the final statement.  Lewis views his conversion more as a concession.  He, the mortal armed with intelligence and spiritual reluctance, while God boldly waves the white flag in negotiation.  Of course it was Lewis who would ultimately surrender to Christ, but the war metaphor is quite fitting for Lewis’ life.  Few know that Lewis was a World War I veteran.  As an Irish citizen, he was not required to apply for the draft, however, Lewis chose to volunteer in the war effort (as his brother Warnie also did).  He celebrated his 19th birthday on the battlefields of WWI, watching in horror as his friends succumbed to injuries.  Lewis himself would sustain wounds during the Battle of Arras in France.  It was during his convalescence that Lewis read G.K. Chesterton for the first time.  Surely this was a divine strategy, as Chesterton’s The Everlasting Man is a work that Lewis dearly admired and credited in helping establish his faith.  But uncovering Chesterton was one of a few fond artifacts of his war experiences.  In his autobiography Surprised by Joy in the chapter “Guns and Good Company”, Lewis admits that he lost several friends, among them a young Oxford scholar named Johnson who “would have been a life-long friend if he had not been killed”.  He also discusses Sergeant Ayres who was “killed by the same shell that wounded me” and who also showed genuine compassion for the young soldier Lewis. Lewis continues, “…he turned this ridiculous and painful relation into something beautiful, became to me almost like a father”.

As the young Lewis marched to and fro across France, he carried with him a notebook. Here he furiously scribbled his reflections on war, on the utter chaos man creates, and his spiritual bankruptcy.  After the war, Lewis would publish his dark recollections as Spirits in Bondage: A Cycle of Lyrics. Published under the pseudonym Clive Hamilton (his mother’s maiden name), Lewis celebrated his first publication, hence public validation of his work. *Note: George Sayer states in his biography Jack: C.S. Lewis and His Times that the original publication bore the name “George Lewis” and “Lieut. G.S. Lewis”.

However, it is a far cry from the Lewis most know; the Lewis who crafted the fine wisdom of Mere Christianity, The Chronicles of Narnia, and The Screwtape Letters.  This Lewis was only a few years removed from the death of his mother, had endured ceaseless torture from other boys in boarding schools, and then came under the tutelage of the intelligent yet religiously dismissive Mr. Kirkpatrick. His disenchanted perspective of the world is captured in the second section of Spirits in Bondage, a piece titled “French Nocturne (Monchy-Le-Preux)”:

Long leagues on either hand the trenches spread

And all is still; now even this gross line

Drinks in the frosty silence divine

The jaws of a sacked village, stark and grim;

Out on the ridge have swallowed up the sun,

And in one angry streak his blood has run

To left and right along the horizon dim.

There comes a buzzing plane: and now it seems

Flies straight into the moon. Lo! where he steers

Across the pallid globe and surely nears

In that white land some harbour of dear dreams!

Once I too could dream,

Who now can only see with vulgar eye

That he’s no nearer to the moon that I

And she’s a stone that catches the sun’s beam.

What call have I to dream of anything?

I am a wolf. Back to the world again,

And speech of fellow-brutes hat once were men

Our throats can bark for slaughter: cannot sing.

The poem begins in the evening after an attack on a village.  Notice Lewis’ use of darkness here to also indicate the absence of morality, civility, and compassion.  Out among the trenches, Lewis notices that “all is still” now where earlier chaos had once reigned.  The silence, which Lewis refers to as “divine”, inhabits the trenches and its men.  The moon is overhead, illuminating the ruin of the village; the village “jaws” have “swallowed the sun” or eliminated all means of hope.  A plane flies over, and seems to fly “straight into the moon”; Lewis imagines the moon as a symbol of dreams. This is obviously an image conjured up in his childhood, but as a young, disoriented adult, he dismisses the childish notion that the moon “harbours of dear dreams”.

Lewis reveals this misguided notion as a farce – “False mocking Fancy!”  And then, the poet draws the reader to himself.  “Once I too could dream/Who now can only see with vulgar eye”.  Lewis has been contaminated by his war experiences.  Once a young boy who experienced a brief encounter with “joy” in a toy garden, now Lewis is a young man, shooting bullets at an unacquainted enemy, astonished beyond disbelief at “horribly smashed men still moving like half-crushed beetles, the sitting or standing corpses…”.  His dreams have vanished, replaced with uncertainty and confusion.  Lewis transforms the beauty of the moon, a symbol of childhood fantasy, into merely an echo of something else, a plain and prosaic rock: “she’s a stone that catches the sun’s beam.”  The moon is nothing on it’s own, rather it reflects a small portion of the absent sun.  Ah, darkness again.  Lewis is empty of emotions, of hope: “What call have I to dream of anything?”  He and his fellow soldiers squirm into foxholes, shoot into a midst of enemies, suffer through shellings and pouring rain and endless marching.  What is there to live for?  Lewis sees himself fundamentally altered: “I am a wolf / Back to the world again”.  He snaps out of his delusion of childhood, of the ideas which poisoned him as a boy.  Deep in the trenches, where his fingers wrap tightly around his rifle, his knapsack is muddy, and his hope is dashed, Lewis has lost his innocence.  The men are changed from men to animals – “fellow-brutes that once were men” open their mouths to sing, but can only “bark” like carnivorous beasts.

An interesting aside, Lewis’ first poem in the collection, titled “Satan Speaks”, uses first-person narration to illustrate how Satan (and darkness) are omnipresent.  This is quite ironic because later Lewis will craft his epistolary masterpiece The Screwtape Letters in the voice of the devil to his protege Wormwood.  Most surprisingly, the first words of Lewis ever officially published are actually words spoken by Satan:

I am Nature, the Mighty Mother,

I am the law; ye have none other.

I am the flower and the dewdrop fresh,

I am the lust in your itching flesh.

I am the battle’s filth and strain,

I am the widow’s empty pain.

I am the sea to smother your breath,

I am the bomb, the falling death.

I am the fact and the crushing reason

To thwart your fantasy’s new-born treason.

I am the spider making her net,

I am the beast with jaws blood-wet.

I am a wolf that follows the sun

and I will catch him ere day be done.

Notice here, in comparing the two poems, that Lewis consistently uses the imagery of death, and more specifically, the repetition of the words “wolf” and “jaws”. In one poem, the term “wolf” describes Satan; in the other it describes Lewis.   Lewis uses contrasting images, one of birth and refreshment (the “flower” and “dewdrop fresh”) juxtaposed with images of death and entrapment ( the smothering sea, the widow’s pain, the “bomb” and the spider’s “net”).  Satan is the “reason” that crushes the “fantasy”, an obvious reference to the faith he no longer embraces.  However, even in Lewis’ spiritual drought, he conjures up authentic imagery of Satan’s deceptive lure, the one who ends the “fantasy” with his dark reality.  If he set out to make Christianity unattractive, he certainly made Satan all the more undesirable in these verses.

Overall, Spirits in Bondage illustrates a young Lewis who is ripening with potential as a writer.  The overt references to his faith are certainly absent, but small roots are stretching beneath, slowly forming the philosophical Lewis who would progress into a voice of optimism during the second world war.   Lewis is not forthcoming with many of his war experiences.  In fact, he states in Surprised by Joy:

It is too cut off from the rest of my experience and often seems to have happened to someone else.  It is even in a way unimportant.  One imaginative moment seems now to matter more than the realities that followed.  It was the first bullet I heard – so far from me that it ‘whined’ like a journalist’s or a peacetime poet’s bullet.  At that moment there was something not exactly like fear, much less like indifference: a little quivering signal that said, ‘This is War.  This is what Homer wrote about.’

Next week, I will continue with more from Lewis’ Spirits in Bondage. 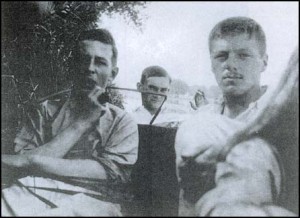 Not too keen on the Gilchrist work as a source; don’t take too much at face value when he starts interpreting Lewis’s inner thoughts or motives.

Thanks Bruce! I removed it from the post because I agree he is too presumptuous. Also, he seems to rely too heavily on secondary sources in the absence of information on Lewis. 🙂