Just recently, I purchased a copy of David Kinnaman’s You Lost Me, an ominous portrait of young, modern Christians who are walking away from the Church in droves.  Why the mass exodus?  Kinnaman, who serves as president of the Christian research firm the Barna Group, uses statistics strengthened by interviews to reveal that many young Christians cannot reconcile their faith with other cultural influences.  One of the chapters titled “Antiscience” discusses how young members (or in some cases former members) of the faith are struggling to connect scientific inquiry and empirical study to a dogma which requires a surrendered faith, believing without seeing.  Here Kinnaman states:

We must do a bettter job challenging and training all young Christians – not just the science geeks – to think clearly, honestly, and comprehensively about matters of science.  This includes understanding the various philosophies that undergird science, scientism, and knowledge.  Teaching philosophy to teens and young adults is not easy, but if we don’t we may be asking too little of the next generation and setting our expectations of them too low. (142)

The book began to spark questions I entertained when I was younger.  Growing up in church, I was taught the basic tenets of faith, to pray, to read the Bible, to faithfully attend a church.  But as I grew older, the harder questions began.  Why do bad things happen to good people?  Why do “bad” people seem to always be ahead, while good people suffer?  Brooke Fraser’s latest album Flags addresses this very issue in the title song:

I don’t know why the innocents fall

While the monsters stand

I don’t know why the little ones thirst

But I know the last shall be first

You see, faith is actually very difficult.  Allegiance to a God one has never seen takes courage and the aforementioned faith.  I have wrestled with doubt, but the most recent struggle (and perhaps the toughest one) was in 2006.

As a graduate student in English, I read many of the towering classics which compose the English canon.  In one evening discussion, a comment from another student gave me a real, but painful clarity about my faith. The student was agnostic, from what I could gather in the discussion.  Despite this lack of connection to a faith, the student made a keen observation that many of the faiths are, in fact, quite the same.  Most faiths have some belief in an afterlife.  This afterlife is seen as either a reward or a punishment for actions during our lifetimes.  For some, the afterlife includes a bevy of virgins, or a mansion, but most importantly, a reunion with the Creator figure.  There are Christ figures and Moses figures throughout history – stories retold and transformed through oral history, the lens colored by a specific faith’s perception.

I was taken aback.  Was it possible that someone of another faith was observing me and accusing me of heresy?  But we are the ones who are “right”, right?  Are my convictions any different than others who are Muslim?  or Hindu?  or Buddist?  Furthermore, why are there strains of similarity in so many religions?

Early in Janurary of that year, my uncle lost his battle with an enduring illness.  At his funeral, the preacher’s voice crescendoed from the pulpit, promising that we will see him again one day.  “He is in a place where there is NO sickness.  Amen?”  Voices rose in affirmation.  I briefly paused to think.  So my faith believes that when you die, you go a perfect place called Heaven where many of those who precede us in death will be.  There is no sickness there, everyone has a mansion, the streets are made of solid gold.  Hmmm, I was starting to see why others would question Christianity as they questioned various other religions.

And what of the Bible?  Did Paul know that his epistolary encouragement would one day be, among other manuscripts, an instruction manual for an entire religion?  Are there interpretations which some people have “taken liberties” with?  Why do some  deceivers blur a Biblical interpretation to persuade people to an idealism?  I had seen it before.  When I was young, my parents were supporters of PTL (Praise the Lord).  I remember my mother watching the morning program during which singers would praise God, singing with eyes closed and hands uplifted.  Later, my parents took me to Heritage U.S.A., a theme park in Charlotte, North Carolina that was saturated with Christianity. My parents and I took a tram tour and I distinctly remember the tour guide looking earnestly in our eyes, pleading for “him to come back.”  The comment received thunderous applause.  The man behind PTL and Heritage was none other than Jim Bakker. Earlier that week, unbeknowst to a child such as I, Bakker was arrested on various charges, including mail fraud, wire fraud, and conspiracy. 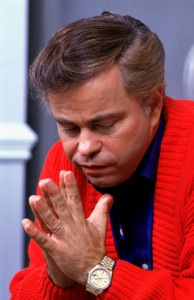 As a child, I was hurt.  What wickedness!  To steal from my parents and other faithful givers, people who go without to contribute to a network which was hemorrhagging money on frivolous items such as an air-conditioned dog house.  At the time, I assumed Bakker was just a greedy man.  Then another televanglist, Jimmy Swaggart, was featured on the news for infidelity.  His pulpit confession became national headlines (and later made a punchline) when he cried, “I have sinned.”

And in this whirlwind of controversy and uncertainty, my generation began to form its faith.  It is no wonder that Kinnaman was finding such a strong response in his research. Where were our role models?  Who would be the next of the flock to step into leadership?  This idea of leadership had been patronized by the media and society for its hypocrasy.  How does one recover?

In the end, the fault is all mine.  The truth is, PEOPLE WILL ALWAYS DISAPPOINT YOU.  Faith lies in God, not man.  The moment it changes hands is the origin of chaos. As for my questions, I eventually resolved them.  C.S. Lewis, in an essay about the simplicity of writing for children, made clear for me the reason why many endorse the idea of an afterlife:

Does anyone suppose that he really and prosaically longs for all the dangers and discomforts of a fairy tale? – really wants dragons in contemporary England?  It is not so.  It would be much truer to say that fairy land arouses a longing for he knows not what. It stirs and troubles him (to his life-long enrichment) with the dim sense of something beyond his reach and, far from dulling or emptying the actual world, gives it a new dimension of depth. He does not despise real woods because he has read of enchanted woods: the reading makes all real woods a little enchanted.  This is a special kind of longing.  – On Three Ways of Writing for Children

I am not, nor is Lewis, suggesting that fairy tales are real.  But fairy tales echo in our hearts; tales tickle that great desire buried deeply within us – that something else. It cannot be explained, but only experienced.  Lewis argues in several works that God has placed echoes of Heaven here on Earth to serve as reminders of the glory that awaits us.  Many religions have a firm belief in the afterlife because, ultimately, we are wired to desire it.  Fairy tales hint at this.  In my last post, I mentioned that our sense of justice originates from our Creator, so does the grand design to which we only catch occasional glimpses but the glimpses are enough to satisfy a restless heart.  Our conviction that a Heaven exists is simply a default setting.  This is the reason for our spiritual curiosity – the answer to the question some struggle with during their entire lives.  The point is to surrender to it.  Disregard the bad examples, know Christ’s sovereignty is for Him alone, and submit to that design.  The adventure is worth the risk.  Besides, a tested faith is one that emerges stronger.  Trials will come, but our God is bigger.

Despite what Kinnaman uncovered about the spiritual stagnance of our generation, I believe that healing is possible and reconsideration is inevitable.  The emptiness cannot endure so surrender will come.  In the meantime, we should remain optimistic and sensitive to God’s spirit as it moves. He will carry us through a season of doubt and usher us to a renewed passion for our Savior. 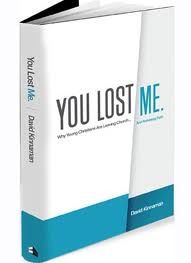