Leadership, Lincoln, and Living in the Passive Voice

“Do you think that people choose to be born?”

In the new film Lincoln, Abraham Lincoln poses this poignant question one evening to two young men employed in the Telegraph office. The calm giant, who towered over his friends and opponents in stature, was uncharacteristically anxious as his political career and the future of slavery depended upon a precarious possibility of peace. Lincoln wanted to abolish the scourge of slavery from the American consciousness.

But he was up against stiff adversaries.  Years of tradition prevented the south from relinquishing its chokehold of slavery. The House of Representatives was sharply divided on the issue of granting African Americans a voice in Congress. Meanwhile, the swarm of hostility extended far outside the debating halls of a young government.  Many men, both Union and Confederate soldiers, lay defeated on crimson battlefields.  Lincoln grieved deeply for the fallen soldiers and secretly arranged a peace meeting between the North and South. Exhausted yet optimistic, he juggled the frustrations of veteran politicians and a maze of diplomacy with the omnipresent dangers of domestic war. Personally, Lincoln still mourned the loss of his own son from illness, and struggled with a wife whose grief nearly overshadowed reality. What a tangle of circumstances was this! It was enough to bring the statuesque politician to his knees.

So that night, Lincoln awaited news on the state of affairs.  He was facing a choir of naysayers and a rising body count. He and two of his telegraphers occupy an otherwise lonely office.  The trio spoke warmly to one another, attempting to distract themselves from the terrible crisis at hand. Lincoln was known as a great storyteller, spinning yarns and eliciting laughter in the most dire of circumstances.  Some mistook his humor for indifference, but Lincoln simply wished to lift the dark cloud from an ominous situation. And so, in a moment of quiet reflection, he asks, “Do you think people choose to be born?” 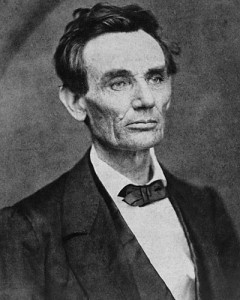 To answer Lincoln, no.  No, we do not choose to be born, but we certainly have plenty of choices which await us as we journey through life. Lincoln could have easily obeyed the status quo and upheld the discriminatory attitude that African Americans were “less” than citizens. But he could not. He could not rest until every man, regardless of color, was guaranteed the same rights under the Constitution. Despite the wave of controversy, Lincoln persisted and utilized every avenue he had to persuade politicians to amend the Constitution to include voting rights for those considered slaves. The decision made him unpopular.  But sometimes good leadership requires one to be so.  Today, he is celebrated as a national and international hero (there is a statue of him near Westminster Abbey in London), but during his lifetime, he was renounced as a heretic.  He was accused of pandering politics, of dividing parties, of upsetting “the Southern economy” and even of disobeying the Biblical principle of slave and master (a verse taken out of context for generations to support the role of oppressors). Nonetheless, he did not relent.  He continued on determined as ever, carried on the tide of his convictions.  The decision, as we all now know, proved fatal.  Was Lincoln a martyr?  Yes, but more importantly, his work and dedication illustrate the significance of his choices.  His decision improved life for an untold number of Americans both past and present.

Pondering Lincoln’s question sparked an interesting inquiry for me.  How much of life is what happens to us?  Furthermore, what aspects of life correlate with our choices?  Are we responsible for the things that occur to us?

As an English teacher, I am very familiar with the passive voice.  Purdue University’s Online Writing Lab describes the passive voice as an instance when “the subject is acted upon; he or she receives the action expressed by the verb” (para. 1).  For example, instead of saying, “Jimmy ate the sandwich”, the sentence reads, “The sandwich was eaten by Jimmy.” We teachers like to take our nice red pens and correct this mistake in essays and research papers, but how many of us live in the passive voice? 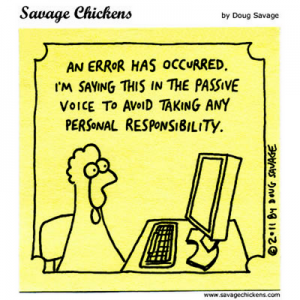 Do we feel that life does us more than we do life?  How many of us travel through life checking tasks off a never-ending list?  Our schedules do not spin out of control all of a sudden.  The pace increases slowly, like filling up an ocean with tablespoons. Can’t you just tackle one more responsbility? Darwin said the key to survival was adaptation.  So we alter our routine to add another task.  There’s a ballgame here, and that meeting there, and we were just invited to this get-together on this date. Suddenly, we face a long inventory of expectations. Are we truly living life or are we carried on the silent gears of our requirements?  Our daily lives move us ever forward. Each spring eventually fades into winter, which melts into another spring.  Life moves so quickly. We stare in the mirror at a slightly older visage.  We see the evidence of laughter near our eyes and…is that a silver hair I see?!

Essentially, we must strive amid our daily lives to the ultimate goals we seek; that is what we were born to do. We may not be called to lead a nation out of slavery, but we have a higher purpose to fulfill.  Every morning, as the sun peaks over the horizon, we are given another opportunity to amend faults, to right wrongs, to create a better community and a better world.  We can do what is required of us (and we should because those things are important), but keep the bigger picture in mind. Progress is not a marathon or an expressway, rather it occurs slowly and methodically.  It requires patience and effort.  Although Lincoln’s life was abbreviated, he spent his living days fighting a daily battle for a better world, an effort that proved successful indeed.

C.S. Lewis once wrote that we often say our tasks prevent us from living our lives, but these tasks are our lives. Lewis knew this truth well.  He balanced a heavy student load at Oxford, sponsored the Socractic Club, responded to each letter he received, helped Mrs. Moore around their home The Kilns – all of this while writing the successful works he is known for today.  He composed the cascading waterfalls of Narnia after watching his faucet create dishwater.  He wrote The Voyage of the Dawn Treader years after building a makeshift skiff with his brother for use in their pond.  A pen occupied his hand, but so did a dishcloth, a broom and a hammer.  Those same hands which captured his imagination also maintained his humble home. We can never escape our work, but rather, create among these responsibilities.

We do not choose to be born, but we can certainly choose how to live our lives. Make it a daily goal to improve the inequities around us, to lead, to serve, to be humble, to have the courage to make a difference.