I am excited to announce my first guest post!  This comes courtesy of the talented William O’Flaherty (the voice and webmaster of EssentialCSLewis.com).  Today marks the 70th anniversary for the American launch of The Screwtape Letters. To celebrate this event, William reflects on Screwtape and its powerful impact.  William O’Flaherty is the creator of EssentialCSLewis.com, an online resource devoted to providing useful information on the life and writings of C.S. Lewis for both the casual and serious reader. He has also contributed articles to NarniaFans.com and Harperone’s official C.S. Lewis blog at CSLewis.com. Having worked professionally as an announcer in Christian radio, he holds a M.A. in Agency Counseling and presently works as a Family Therapist.

A Don and Two Devils Hit the Big Time
by William O’Flaherty
(EssentialCSLewis.com)

Seventy years ago this month an Oxford Don went from being a relatively unknown author in the United States to what we would call “going viral” today. Although The Screwtape Letters had been released a year before in the U.K. and did very well there (see my blog, “International Screwtape Month?”), it wasn’t published until February 16, 1943 in the U.S. Now, fifty years after his death (he died in November, 1963 on the same day JFK was killed) his star shines even brighter. The Screwtape Letters features the correspondence of a senior demon (Screwtape) written to his nephew (Wormwood) who is just starting his first assignment as a tempter. Each of the 31 letters can be read in about five minutes and provides what is sometimes humorous advice from the devil. It’s like getting a glimpse at your worse enemy’s plans to ruin your life. Imagine being in a battle and discovering letters from the opposing side with details about how it plans to destroy you.

If you lived in England in the early 1940’s you would have had the opportunity to get the inside information even earlier. The letters were first released weekly in The Guardian starting in May, 1941. Interestingly the satirical material caught some readers off guard. One person canceled their subscription because of not agreeing with the advice given by Screwtape. This individual missed the reverse viewpoint that Lewis presented. Thus, “the enemy” was God and “Our Father Below” was Satan.

If you are not familiar with the book you might fear Lewis has an unhealthy interest in devils. Lewis is aware of this tendency, but he also points out the other extreme is possible. In the short preface Lewis says:

“There are two equal and opposite errors into which our race can fall about the devils. One is to disbelieve in their existence. The other is to believe, and to feel an excessive and unhealthy interest in them.”

As noted already the book is rather short, however if you want to enjoy the content in other ways besides the traditional format you have many options. First is a graphic novel of the book that was published by Marvel Comics in the 1990’s (but it is out of print). There have been several audio book versions released, including one by John Cleese. Less than ten years ago an audio drama adaptation was made by Focus on the Family Radio Theatre. It features the vice of Andy Serkis who is famous for his role as Gollum in The Lord of the Rings movies. There is even a live stage adaptation of The Screwtape Letters. The production is led by Max McLean and is currently on a national tour.

Providing a complete summary of The Screwtape Letters would be a difficult task in this short essay. That said, I do want to share some of my most enjoyed quotes from the book. Before doing this, however, I want to stress the importance of reading (or re-reading) the book itself. Some of the best material is either too lengthy to quote, or the ideas are revisited across several letters. Someday I’ll finish an index I once started looking at the topic addressed and where you find them throughout the book.

“It is funny how mortals always picture us as putting things into their minds: in reality our best work is done by keeping things out.” (Letter 4)

“The great thing is to direct the malice to his immediate neighbours whom he meets every day and to thrust his benevolence out to the remote circumference, to people he does not know.” (Letter 6)

“Do not be deceived, Wormwood. Our cause is never more in danger than when a human, no longer desiring, but still intending, to do our Enemy’s will, looks round upon a universe from which every trace of Him seems to have vanished, and asks why he has been forsaken, and still obeys.” (Letter 8)

“He may say on his arrival down here, ‘I now see that I spent most of my life in doing neither what I ought nor what I liked.'” (Letters 12)

“The man who truly and disinterestedly enjoys any one thing in the world, for its own sake, and without caring two pence what other people say about it, is by that very fact fore-armed against some of our subtlest modes of attack. You should always try to make the patient abandon the people or food or books he really likes in favour of the ‘best’ people, the ‘right’ food, the ‘important’ books.”  (Letter 13)

“In the long run either Our Father or the Enemy will say ‘Mine’ of each thing that exists, and specially of each man.” (Letter 21)

William O’Flaherty started creating a variety of resources on C.S. Lewis just a few years ago and long ago brought them together in one place at EssentialCSLewis.com. For more details about The Screwtape Letters visit his blog that contains a special podcast of a talk he did on an introduction to the book. Also, last year he released a “new” address by Screwtape himself at a special Demon-Chapel.

Get the latest from EssentialCSLewis by following on Twitter: @CSLewisFacts 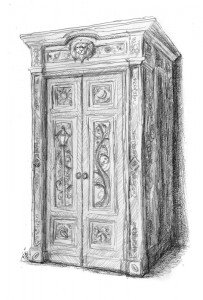