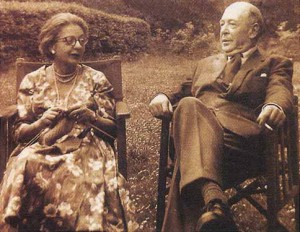 “Who said I disliked women?  I never liked or disliked any generalisation.”

Last March, I stood before a committee of academics, my husband, and a few strangers and defended my dissertation on C.S. Lewis as Transformational Leader.  As I discussed how Lewis’s beliefs inspired his leadership, a member of the faculty who was there to ensure “protocol was followed” listened intently while scribbling furiously on a notepad.  This individual had never read my manuscript, nor was he informed about leadership principles.  He was a member of the science faculty with no prior knowledge of my research. During my presentation, I explained how Lewis concurred with John Milton’s Hierarchical Conception, that God created a necessary hierarchy to establish order.  I utilized this quote from his essay “Membership” (located in The Weight of Glory):

I do not believe that God created an egalitarian world.  I believe the authority of parent over child, husband over wife, learned over simple to have been as much of a part of the original plan as the authority of man over beast.

After my presentation, I answered all questions from my committee and felt a surge of relief.  I was ready to indulge in a congratulatory burrito. And then, the quiet, contemplative scientist spoke.  What followed was a 15-minute diatribe on how Lewis condoned domestic violence because he was a spokesman for “Western Christian tradition” which encouraged misogyny and the oppression of women.  Furthermore, he refuted my claim that Lewis served as a leader (although he was uninformed of leader scholarship).  In retrospect, he reminded me of many passages from That Hideous Strength.  My committee and I both rose to the challenge and finally, the man relented after several minutes (that’s why they call it a “defense” right?).  I emerged victorious, but slightly wounded.  How could anyone portray Lewis that way?  It was evident that the man had never read Lewis, based upon his assessment and assumptions.  How could anyone deduce that Lewis hated all women from two measly sentences? It had never surfaced during months of research and composition. In fact, the new chair of Women’s Studies was a critical member of my committee.

If he had asked for the rest of the quote, he would have found that his absurd assumption that Lewis “condoned domestic violence” was flawed logic.  Just because one suggests order, does not mean he/she supports tyranny (or a corruption of order).  Lewis continues:

I believe that if we had not fallen, Filmer would be right, and patriarchical monarchy would be the sole lawful government.  But since we have learned sin, we have found, as Lord Acton says, that “all power corrupts, and absolute power corrupts absolutely.” The only remedy has been to take away the powers and substitute a legal fiction of equality.  The authority of father and husband has been rightly abolished on the legal plane, not because this authority is in itself bad (on the contrary, it is, I hold, divine in origin), but because fathers and husbands are bad.  Theocracy has been rightly abolished not because it is bad that learned priests should govern ignorant laymen, but because priests are wicked men like the rest of us. Even the authority of man over beast has had to be interfered with because it is constantly abused.

Long after that afternoon had passed, I searched for more information on Lewis’s view of women.  What I found was, for the most part, harsh criticism from many females in the academic community.  This partially orginates from Lewis’s strong opposition to feminism (which will be explored later).  The more I searched, the more I discovered that some women harbored resentments toward Lewis and his “misogynistic tendancies”.  As a female Lewis scholar, I wish to explore Lewis comprehensively and illustrate that Lewis did not “hate women”.  On the contrary, Lewis perceives women as multi-faceted beings.  He presents very different, yet realistic (if somewhat exaggerated) portrayals of women in his various works of fiction. For example, many readers are livid that Susan does not cross into Aslan’s Country in The Last Battle because she is preoccupied with “nylons and lipstick and invitations”.  However, these same individuals fail to mention that Lucy, the youngest female, is the most faithful of the Narnian monarchs; she is the one who first believed in Narnia and whose faith help lead the others through the wardrobe (and the painting in The Voyage of the Dawn Treader).  Her indomitable faith in Aslan helps lead them through the forest (as she insists on following Aslan) in Prince Caspian. Here, we see an exclusivist technique of critiquing Lewis, a “picking and choosing” of specific passages while blatantly ignoring others.  What I hope to illuminate is that Lewis’s female characters represent a wide spectrum of women, just as his male characters represent a wide spectrum of males. 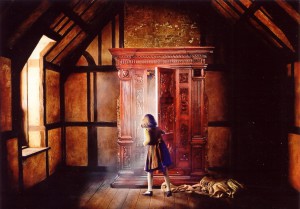 Over the next twelve weeks, I will examine Lewis’s encounters and literary portrayals of women.  The first six weeks will explore biographical aspects of Lewis, from his mother (whom he lost at a young age) and his female correspondents, to his budding friendships with Ruth Pitter and Joy Davidman.  The latter, of course, would become his wife in 1956.   The second six weeks will discuss Lewis’s literary treatment of women, along with some commentary on the roles of women.  Every weekend, I will post a new installment of the series.

Week One –  The Sinking of Atlantis: Flora Lewis

Week Two – Light in the Darkness: Miss C., the Matron

Week Four  – Ladies and the Letters: Lewis and His Female Correspondents

Week Eight- Lewis and Women: Portrayals in The Pilgrim’s Regress

Week Nine- Lewis and Women: Portrayals in The Chronicles of Narnia

Week Ten- Lewis and Women: Portrayals in The Science Fiction (or Ransom) Trilogy

Week Eleven- Lewis and Women: Portrayals in Til We Have Faces

I promise that it will be an enlightening (and perhaps for some, redeeming) account of the beloved Lewis.  Will you join me?  Please spread the word!

OK, you got me hooked with Lewis and his relationship to women. I’ve always been impressed with his insights to the human condition, but must confess that I’ve been less than impressed with displaying firsthand knowledge of women. He gets men down so well, but women usually come across as a bit caricatured in his writings.* I’ve never seen a misogynistic strain, though; those charges are leveled by people who I would bet have not read much Lewis if any.

*I don’t think it’s a function of a writer not being able to understand and portray well members of the opposite sex. Look at Jane Austen. Every man in her novels reminds me of some guy I know.

Glad you can join me Tim! Lewis honestly didn’t have much first-hand experience with women other than Mrs. Moore for many years. I mention that some of his female characters are a bit exaggerated and caricatured, but I aim to illustrate his development of women throughout his literature and his perspective.