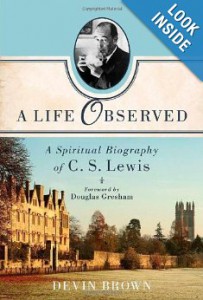 This year, the fiftieth anniversary of Lewis’s death, has been an exceptional one for Lewis scholarship.  First, Alister McGrath’s biography revealed new information about Lewis’s reported conversion date.  This was confirmed by Lewis scholar Andrew Lazo in the latest volume of VII and on First Things. The “Early Prose Joy” manuscript, compared with correspondence between Lewis and his friends Owen Barfield and Arthur Greeves, provides great insight into Lewis’s actual conversion date.  As Lewis noted many times throughout his life, his conversion was not a tear-stained, emotional climax during a solemn altar call (complete with a musical crescendo) resulting in absolute surrender. In contrast, it was a slow and steady journey, a fleshing-out of perceived intellectual contradictions and spiritual ambiguities. His conversion was one of consistent seeking, of long discussions with valued colleagues, of coming “kicking and screaming” into the presence of God to become a “reluctant convert”.

This is the fascinating angle from which Lewis scholar Dr. Devon Brown chooses to approach Lewis in his newest biography A Life Observed: A Spiritual biography of C.S. Lewis. In the foreword, Lewis’s stepson Douglas Gresham explains how this is a biography of a different, yet essential nature:

I have more or less given up reading the new biographies of Jack, not so much because of the inaccuracies they contain – through there are usually  enough of them – but because they are written by people who knew him far less well than I did, if they knew him at all.  Their words, speaking only of the good biographies, are the products of much reading of Jack’s works and are much research into what others have written about him. They are consequently prone not only to error but also to a more serious malady – they dry out! The pages crackle with facts, faces, places, dates, and history. Some of them are very good books about Jack, but – here’s the rub – Jack is not in them (ix-x).

Mr. Gresham raises an interesting point: most biographies indulge in details. They often tackle the lengthy narrative of facts, from an individual’s great-great-great-great grandfather’s career to his/her style of architecture or favorite dish.  These aspects may demonstrate the author’s prodigious research skills and be deemed necessary by some more critical members of the reading audience, but do they lend us genuine insight into the person examined?  Does this amalgamation of facts give us a true portrait of the person we so deeply admire?  Frankly, it doesn’t.  Gresham’s endorsement of this text proves that it is not “just another biography” of C.S Lewis.  This work makes a close examination of what I believe is one of the most important facets of C.S Lewis’s life– his turning to Christ and acceptance of Christian doctrine.

Brown chronicles Lewis’s long, arduous journey from the shipyards of Belfast, Northern Ireland to the prestigious halls of Oxford. He skillfully weaves various quotes and reflections from Lewis’s works into the narrative, illustrating how Lewis’s works were directly influenced by many of his life experiences. The Screwtape Letters, The Chronicles of Narnia, and the Ransom Trilogy are frequently referenced alongside Mere Christianity, the Collected Letters, and Lewis’s autobiography Surprised by Joy.  Once the biographical excess typically featured in other biographies is stripped away, we see more concisely Lewis’s narrative liberated from a litany of extraneous details, of “facts, faces, places, dates, and history” which tends to delay the natural pace (and often the enjoyment) of the reader.

One of the many strengths of Brown’s biography is its readability.  There is often a tendency for highly educated authors to complicate the narrative with complex terms and excessive (often unnecessary) displays of erudition. But Lewis himself learned to successfully communicate Truths to the common man/layman in plain language.  He possessed a great gift of extrapolating difficult concepts by using colloquial expressions and illustrations. Brown, thankfully, has this same gift.  He presents his subject matter in a clear, thought-provoking way.  This biography would, in no way, confuse or intimidate the average reader.  It is both an enjoyable and instructional read.

I own several of Brown’s works and have found the same clarity and depth in those works as well.  He has been a celebrated Lewis scholar for many years, and therefore, serves as a trustworthy guide for Lewis’s spiritual journey. I urge you to add this book to your Lewis collection. It truly is not just “another Lewis biography” but a crucial exploration into the spiritual aspects of Lewis we perpetually find so fascinating.